IRSYAD USUL AL-FIQH SERIES 20: THE MAXIM OF “THE ORIGINAL RULE OF SOMETHING IS ITS PERMISSIBILITY” AND ITS RELATION TO THE RULING OF SMOKING 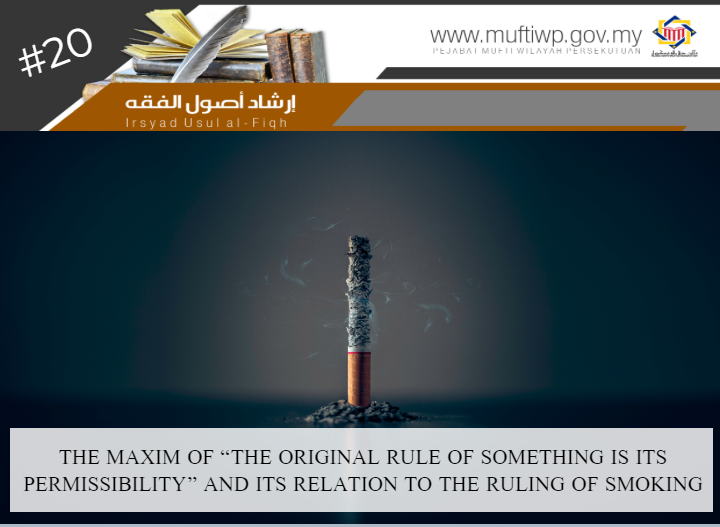 Assalamualaikum, ustaz. How should we answer a person who smokes and claims that smoking is permissible according to the Islamic legal maxim which states; the original rule of something is its permissibility?

Basically, among the maxims decided by the jurists (fuqaha’) is a maxim “The original rule of something is its permissibility”. It is stated by some scholars in their books like Imam al-Suyuthi where he said:

“The original rule of something is its permissibility”

Imam al-Suyuthi Rahimahullah when mentioning this maxim said: “This is our madhhab (the Shafi’ite scholars)”.

The above maxim shows that the original rule of something is its permissibility. Hence, it may lead to a misconception of some people in the society that this maxim is generally imposed to all matters including smoking itself.

In fact, the above maxim is already clear to answer the misconception in whether the action of smoking is permissible or not. This is because, when there is no dalil of prohibition upon a matter, then it stays with the original rule, which is permissible. However, when there is a dalil of prohibition, then the ruling of it becomes haram (prohibited).

The Dalil on Prohibition of Smoking

The action of smoking is clearly prohibited based on the following reasons. Among them are:

First: Harmful to the Body

In the Quran, Allah SWT states the prohibition of throwing oneself into destruction. This is in accordance with the saying of Allah SWT in the Quran:

“And do not throw [yourselves] with your [own] hands into destruction”

In an Islamic legal maxim, it is stated:

Hence, words of prohibition in the stated verse clearly indicate the prohibition of something that could cause destruction upon oneself and the action of smoking is included in matters that is harmful for a person.

This is also in accordance with the saying the Prophet PBUH:

“Do not inflict nor reciprocate harm”

The above hadith is a famous hadith which shows that Islam forbids any form of infliction and reciprocation of harm towards others. In the perspective of usul al-fiqh, a maxim states:

“Nakirah in the context of expulsion indicates generality”

The phrase dharar in the hadith comes in the form of nakirah. Hence, it means that Islam forbids all form of harm in every aspect and side. This includes harm that comes from the action of smoking on one’s health as well as the negative effects on others in the vicinity.

Second: Smoking is a Waste of Money

and do not spend wastefully (26) Indeed, the wasteful are brothers of the devils, and ever has Satan been to his Lord ungrateful (27)

Wasteful is one spending the provision given by Allah SWT in a wrong and sinful path. Smoking is clearly a form of sin. So, buying cigarettes is also wasteful. The dalalah (indication) of the prohibition of wastefulness is the presence of لا الناهية as well as being compared to the brother of Satan.

The fact is cigarettes are something that contains filthy things like nicotine, tar, and others. Human nature will never deny the fact that they are filthy. Allah SWT says in the Quran:

The dalalah (indication) of the prohibition is the phrase ‘tahrim’ in the above verse which indicates that filthy things are haram for a human being.

Tips on How to Quit Smoking

For those who intend to stop smoking, kindly follow the discussion on the tips through the following link:

To close, we would like to state that the misconception of people on the legal maxim could lead to the misconception in the religion. It includes when someone claims that smoking is permissible by taking the maxim “The original rule of something is its permissibility” as the argument. The following matters should be our guide to have a better understanding in the Islamic legal maxim:

The original rule for something beneficial is permissible

The original rule for something harmful is prohibited (haram)

Hence, according to the guidelines on the Islamic legal maxim which we mentioned, it is clear that smoking is haram, and the maxim mentioned is absolutely incorrect to be made as an argument of its permissibility. May Allah SWT give us correct understanding in religion. Ameen.