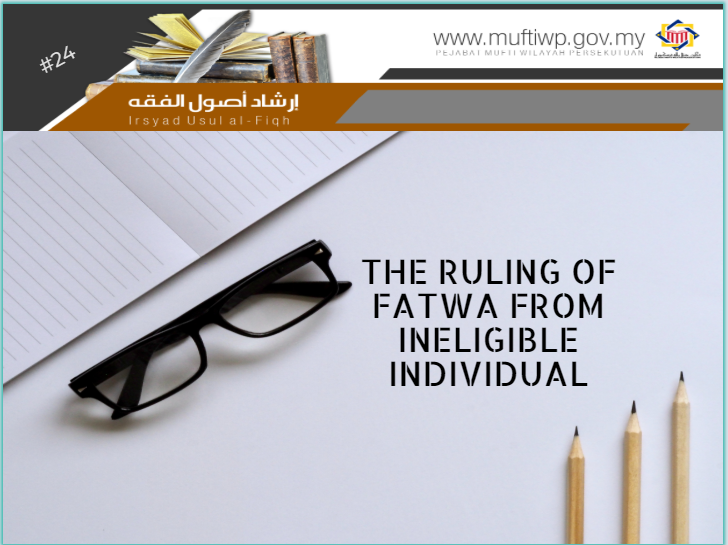 Assalamualaikum SS Dato’ Seri Mufti, I have a question, what is the ruling of fatwa from an ineligible individual? Hope for some enlightenment.

Firstly, let us ponder upon our own flaws and weaknesses. Searching and being diligent in knowledge should be a constant in our lives for the attribute of knowledge itself is it is always developing and emerging.

Looking back to the salafus soleh, we will find that they will never issue a fatwa unless their knowledge and capability in issuing one is approved by the teachers and scholars of that time. For example, the saying of Imam Malik:

“A man shall not see himself as qualified in something until he asked another person who is greater in knowledge than him on this. And I never issue fatwa before I asked Rabi’ah and Yahya bin Sai’d on this first, then both of them told me to do so (issue fatwa). If both of them forbid me, then I shall stop”

Secondly: In answering the question above, we cite the words of Ibn Hamdan in his book, Sifat al-Mufti wa al-Mustafti, he said:

“Whoever issues a fatwa while being unqualified, without any dire need (dharurat) in doing so, he is considered as a sinner and is committing ma’siah [1].”

This is because, he does not know what is the truth or otherwise. He is like a blind man who refuse to follow those with sight. His blindness makes it so he is unable to differentiate between the truth and falsehood. Allah SWT says:

Who are hasten in issuing fatwa in a situation where he assumes he is eligible to do so, should curse himself and be more God-fearing.

The reason is, a person who is proficient in the science of usul or khilaf, or in Arabic language, but not competent in Fiqh, it is haram for him to issue any fatwa upon himself as well as others. It is due to his incapability on understanding the rulings based on a correct method of ijtihad. It is also due to his lack of expertise and competency in doing so.

Furthermore, if he lacks the knowledge of current rulings from the imams’ mazhab in his time because he neither memorizes, nor did a thorough analyzation by using a correct technique. Hence, it is forbidden for us to use his opinion as a judgment. Even without his presence, the scholarly consensus (ijma’) still takes place according to the most sahih mazhab.

While, Abu Hanifah allows people to taqlid (follow) him on issues in which other scholars issue the same opinions as his. It is permissible to rule by it. However, it is impermissible to follow him when even the Mufti, hakim and those of the same level of knowledge as those two do not possess the knowledge on certain issues.” (Refer Sifat al-Mufti wa al-Mustafti by Ibn Hamdan, pages 59-61).

Hence, it is good to have the culture of muzakarah and intellectual discussion as well as mulazamah those qualified scholars in gaining the knowledge and sharing the information, which results in accurate opinions as well as correcting mistakes in some people.

May Allah SWT bless us with knowledge and understanding. Amen.

[1] This shows the immense responsibilities a Mufti has as well as the need of having qualifications and stated requirements. This is also an indication that issuance of fatwa is of high importance in Shari’ah.