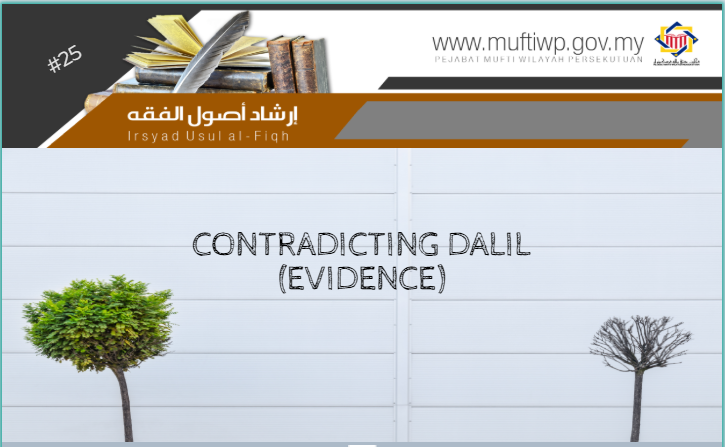 Assalamualaikum. SS Mufti, how do we perceive the dalil which cannot be combined when there is a contradiction in both opinions?

Ibn Hamdan Rahimahullah once said: “If the two opinions cannot be combined, but the time in which both opinions are presented is known, then the later opinion will be the person’s stand. This is the selected opinion of al-Khallal [1] and his companion [2]” (Refer Sifat al-Mufti w al-Mustafti. Page 256)

In the discussion of al-Ta’arudh Bayna al-Adillah (contradictions among the dalils), the majority of the jurists state that there are three techniques to be used to resolve this contradiction:

First: By using the method of al-Jam’u wa al-Taufiq (Combining and harmonizing between the contradicting dalils).

Second: If they cannot be combined, then tarjih (disposition) method is used, in which one of the dalils is labelled as rajih, while the other is marjuh.

Third: By the method of nasakh (to abrogate), which is by stating that one of the dalil as naasikh (the one that abrogates) and the other as mansukh (to one that is abrogated). However, this should be done by observing which one comes earlier and which is later.

We are of the first and second opinion.

May this explanation help us in searching for the true answer when interacting with the nas and dalil in doing istinbat as well as finding the tarjih (disposition) of these dalils.

[1] Abu Bakr Ahmad bin Muhammad bin Harun bin Yazid al-Baghdadi. He is known by the name of al-Khallal. Born in the year of 235 H and wafat on 311 H.

[2] Which is Abu Bakar Abd al-Aziz or known by the name Ghulam al-Khallal. Died in 363 Hijrah.