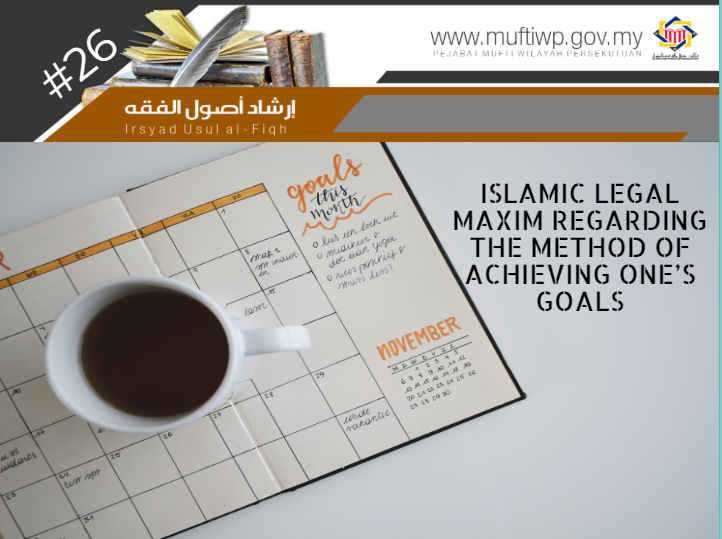 Assalamualaikum SS Dato’ Mufti. There is a saying that states wasilah (means) acts as the intermediary of achieving a certain goal. Is this a saying of the Prophet PBUH or an Islamic legal maxim and what is the meaning of it?

It is a renown Islamic legal maxim:

The above legal maxim means every means or method rulings depends on the goal itself. If the goals one is trying to achieve is bad or evil, then any means or method or way to attain such goals is prohibited. The same can be understood where even if the purpose or aim is good, then the means must also be only of permissible ways.

Whatever that could lead to anything that is prohibited, then it is also prohibited. For example, for a grape seller, then his work is originally permissible. However, if he has certain information that the buyer intends to process the grapes he’s buying to produce wine, then the sale of the grapes is prohibited. The same goes for the sale of firearms, it is originally permissible, but if someone sells firearms to a person or a group of people who intends to rob others, then the sale is prohibited. This is what is meant by (الوسائل لها أحكام المقاصد).

Syeikh al-Sobuni said: You should help one another in good deeds, avoid sin, transgression and (cooperate) in matters of obedience to Allah SWT. (See Sofwah al-Tafasir, 1/301)

This Islamic legal maxim is stated numerous times by scholars and jurists. One of them is Imam al-Qarafi in his book al-Furuq. He said: The Islamic legal maxim “لوسائل تتبع المقاصد في أحكامها” (Every wasilah or means depends on the purpose or intention.”). The meaning of it should be understood as such, if the aim or purpose itself is prohibited, then it is prohibited and if the wasilah is obligatory, then the aim or purpose of it is also an obligation. The same goes for the rest of their rulings. (See al-Furuq, 3/111-112)

Imam al-Tufi said that it is included in the kulliyy maxim (the major maxim) and not the branch of it. (See Mukhtasar al-Raudhah by al-Tufi, 3/89)

Imam al-Syafi’e states in his book: Everything in terms of zara’i which leads to the permissibility or prohibition is the same as anything that leads to the meaning of permissible and prohibited. (See al-Umm, 4/57)

As for a saying that we often hear which is “الغاية تبرر الوسيلة” (The end justifies the means) holds the meaning – if the ends (purpose/goal) is good, then it is not prohibited to achieve it with any means possible – this is a clear contradiction with the truth. This is also a contradiction of our honoured religion of Islam.

May Allah SWT give us the right understanding in practising the commandments in Islam the best that we could. Amin.