IRSYAD USUL AL-FIQH SERIES 28: IS IT PERMISSIBLE FOR A WOMAN TO BECOME A MUFTI? 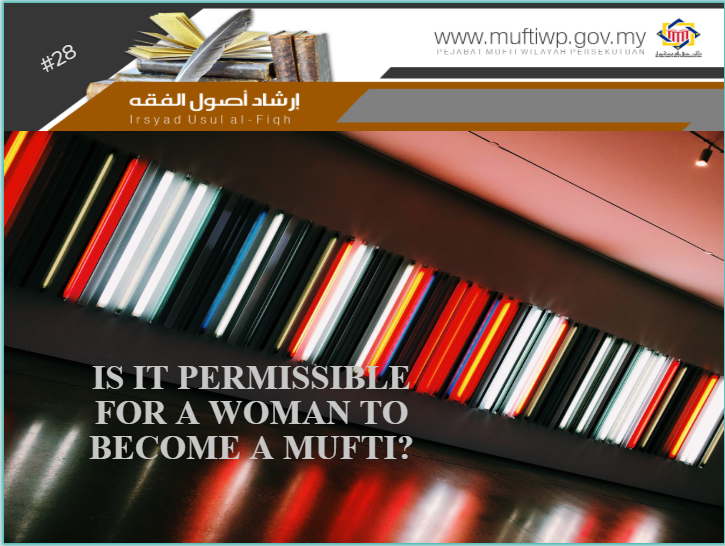 Assalamualaikum. SS Mufti, I would like to ask a question. Is it permissible for a woman to become a mufti, or is there a condition stating that only a man can become a mufti?

He also cited an opinion which defines Mufti as:

“An eligible individual with deep knowledge of hukum syarak (Islamic law) of the occurrences by referring to the evidences, as well as his memorizations in majority of the Fiqh issues”. Refer Sifat al-Mufti, Ibn Hamdan (page 125).

Based the on the definitions of Mufti stated above, it shows that there is no specification of gender for someone to be a Mufti. Instead, this shows that whoever conveys Allah’s laws upon occurrences referring to the evidences, can be said as Mufti.

The same is when we open books on fatwa’s issues, they never put male as a condition to become a Mufti. In fact, Imam al-Nawawi Rahimahullah said:

“The condition of being a Mufti is one should be a mukallaf, a Muslim, tsiqah and a trusted individual, free from any means of being fasiq, free from any actions that may defile his dignity, faqih al-nafs, has a sound mind, good in his business, upright in doing istinbat, and mindful (when issuing fatwa). Be it a free man, slave, woman or blind”. Refer Muqaddimah al-Majmu’, Al-Nawawi (1/41).

Here, we include some arguments which state the permissibility of a woman in giving fatwa:

First: Allah mention in the Quran:

"The believing men and believing women are allies of one another. They enjoin what is right and forbid what is wrong"

Second: Issuing fatwa is not the same as in qadha’ (make rulings in the courtroom). The reason is, rulings from a judge are mulzim (liable to be adhered to). Meanwhile, a fatwa is not mulzim for a mustafti (the one who seeks for fatwa) to accept. He is free to follow it or not. [1]

Third: The conditions of being a mufti as mentioned above by Imam al-Nawawi and Imam Ibn Hamdan do not imply that fatwa only can be issued by a man. Instead, it is possible for a woman to issue a fatwa.

Fourth: Historically, fatwa from a woman in matters pertaining to women occurred before. This is like how famous Ummu al-Mu’minin Aisyah R.Anha and Ummu al-Mu’minin Ummu Salamah in answering questions on Fiqh which took place during their time.

Fifth: There is some clear public good (maslahah) for a woman to give fatwa to her female friends. This is because, women are known for their shyness, which sometimes, makes it hard for her to ask questions on hukum syarak from the men. Hence, there is goodness in having a female Mufti whom expert in Shari’a as well the rulings to issue a fatwa.

To conclude, we state here that the original ruling is, it is permissible for a woman to be a Muft if she fits the set conditions. If questions are brought upon to her, she is able to give answers according to the knowledge she possesses.

As for the position of Mufti as an official position in a state or a country, the zhuruf (situation) shall be valued while taking into account some maslahah. It is widely known that in the world generally and Malaysia specifically, there are some deterrents for a woman to become an official Mufti. That is why it is not a sight in Middle Eastern countries like Egypt, Saudi Arabia, Jordan and others. The reason is, the official position as a Mufti does not only mean issuing a fatwa, instead, it is also in his job scopes to lead the prayer (being an imam), being a khatib in delivering khutbah, lead du’a, as well as other official tasks for the country and its society.

Lastly, may Allah SWT give us a clear understanding of religion. Ameen.

[1] This is the general depiction. However, if a Mufti already issues opinion in rulings based on valid and sarih evidences, then there is no flexibility (not permitted) for the one who asks for fatwa to abandon it while choosing other fatwa which is not strong.

As for the case of when laws of the country have made fatwa from a Mufti becomes official by gazette, then it is liable for the people to adhere it.

For further references of this issue, kindly please refer to the translation of Sifat al-Mufti wal Mustafti (in Bahasa Melayu) published by Mufti’s Office of Federal Territories.