IRSYAD USUL AL-FIQH SERIES 31: CHANGE OF THE RULES ACCORDING TO THE CHANGE OF TIME AND PLACE 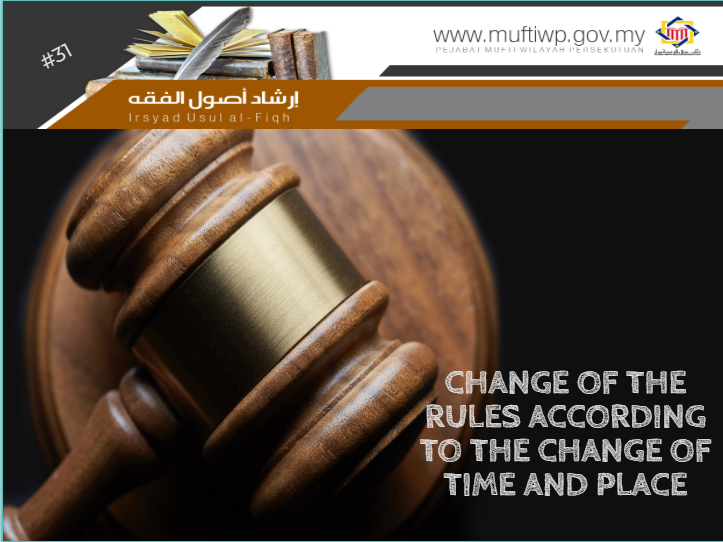 Assalamualaikum. SS Mufti, is it true that a ruling may change in accordance with changes in time and place?

There is an Islamic legal maxim which states:

Syaikh Mustafa al-Zarqa’ in his commentary upon this maxim said: “It is irrefutable that rulings change in accordance with changes in time; changes in ‘urf and ‘adah (custom) of residences in certain places. If specific ‘uruf and ‘adah leads to some rulings, then both of them change, which resulted in changes of the rulings in correspondence to the new ‘uruf and ‘adah.”

He also said: “This matter (changes in rulings according to changes in time) is agreed, used and tsabit. It is also a sunnatullah of sanctioning upon the servants of Allah. Indeed, in the early state of man where there were limited numbers of zuriat, Allah SWT permits marriage between siblings, as well as widening the permissibility on some matters. The ruling stayed until the offspring became more in numbers, then the said marriage was forbidden starting that particular time.” [1]

Imam al-Syatibi then said: “Know that what is mentioned here, in which changes in rulings when ‘adah changes do not mean that there are alterations in the asl al-khitab (the original ruling from Allah), The reason is, Shari’a remains forever. If it is imagined that dunya remains without endings, the obligations will also be in accordance with it (fixed). Shari’a does not in need of any embellishments.”

Indeed, the meaning of differences (in rulings) is, if the ‘adah differs (from one person to another or from a place to another), then all of them will be brought back to syarak which pledges rulings for them. As for example, the issue of puberty. Khitab al-taklif (the commandment to fulfil some obligations) is lifted upon children as long as he does not reach puberty. When he reaches puberty, then he has to bear with the taklif.

Hence, the lift of taklif before puberty and the command of it after reaching puberty does not indicate that there are differences in the khitab (command from Allah). Instead, the differences merely due to ‘adah and situation. [2]

To conclude, we would like to state that the meaning of changes in rulings caused by changes in time and place is only limited to rulings which are al-mutaghayyirat (changeable). For al-tsawabit (fixed and permanent) like the sanctioning of prayers, fasting, the prohibition of adultery, consuming alcohol, likewise, then it is definitely not in according to the changes in time and place.

Lastly, may Allah SWT give us true understanding of practising our religion. Ameen.