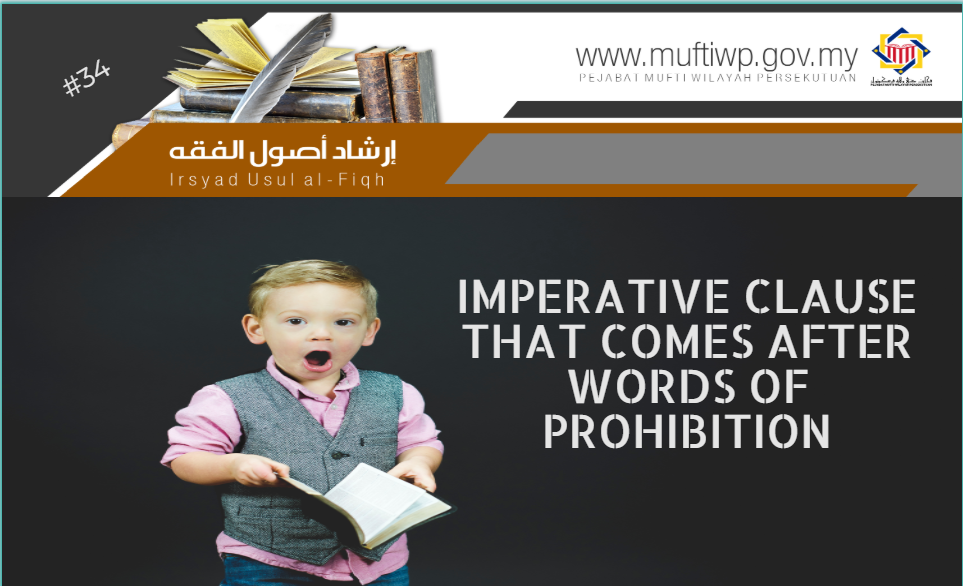 Assalamualaikum SS Mufti. I always hear that imperative clauses in the Quran hold obligatory command. My question is, there is a verse of al-Quran which means: “And when they have purified themselves, then come to them from where Allah has ordained for you” (When one’s wife has purified themselves from her menses, then the husband shall have sexual intercourse with her). Then, is it obligatory for the husband to do so?

Basically, all command from Allah SWT and His Prophets holds obligatory command. This is based on the verse of al-Quran:

It is not for a believing man or a believing woman, when Allah and His Messenger have decided a matter, that they should [thereafter] have any choice about their affair

In the above verse, Allah SWT forbid believing men and women from doing anything based on their ikhtiar (choice) when there is a command from Allah SWT and the Prophet.

It is also in accordance with the saying of Allah SWT in the Quran:

So let those beware who dissent from the Prophet's order, lest fitnah strike them or a painful punishment

If we observe the stated verse carefully, we will find that there is a threat of torments and afflictions to those who contradict the Prophet PBUH’s command. As we all know, one is not simply threatened with torments except when he leaves obligatory commands.

Both verses are the indication that all command of Allah SWT and the Prophet PBUH hold the meaning of obligations in which no single person may defy them. Hence, the jurists (usuliyyun) upon discussing the issue of dalalah al-amr (indication for imperative clauses), they bring along a famous Islamic legal maxim:

Imam Al-Haramain Abd al-Malik al-Juwaini said: “Amar (imperative clauses) is a command of doing something through words towards those who are inferiors in the form of obligatory (to do). Its sighah (form) is through the phrase افْعَل (do it!) and the command comes in an absolute form while being excluded from any qarinah (clue/connotation) which makes it be interpreted differently. Except if the imperative clauses have any indication that they hold Sunnah or permissibility (harus) meanings” (Refer to Al-Waraqat, Abdul Malik al-Juwaini, page 13).

Nevertheless, this maxim cannot be used for every occasion. This is because, the jurists also had discussed on the dalalah al-amr ba’da al-nahyi (indication for imperative clauses that come after words of prohibition).

This happens due to the presence of certain actions prohibited in the Quran at first, but later followed by the commandment to practice the same said actions afterwards. Then, is the ruling to do the actions become wajib (obligatory) or otherwise?

The following we state some examples related to this issue. Among them are:

First: The Ruling of Trade after the Performance of Friday Prayer

As we know, the ruling of trade when adhan for Juma’h prayer is called is haram (prohibited). This is clearly stated in the verse of Qur’an:

O you who have believed, when [the adhan] is called for the prayer on the day of Jumu'ah [Friday], then proceed to the remembrance of Allah and leave trade

Then, in the phrase “and leave trade”, it indicates the prohibition of trade upon the adhan for Juma’h prayer is called. However, the verse is followed by:

And when the prayer has been concluded, disperse within the land and seek from the bounty of Allah,

Second: The Ruling of Hunting Upon the Completion of Tahallul for Ihram

Among the issues discussed is regarding the ruling of hunting when one completes his tahallul (comes out of ihram). This is due to the prohibition of hunting when he is in the state of ihram. This is in accordance with the saying of Allah SWT in the Quran:

O you who have believed, fulfill [all] contracts. Lawful for you are the animals of grazing livestock except for that which is recited to you [in this Qur'an] - hunting not being permitted while you are in the state of ihram. Indeed, Allah ordains what He intends.

According to the verse, Allah SWT prohibit those who are in the state of ihram to hunt. Meanwhile, the verse after that states:

But when you come out of ihram, then [you may] hunt

Therefore, is hunting after coming out of ihram hold obligatory command?

Third: The Ruling of Having Sexual Intercourse between Husband and Wife Upon the Wife is Cleansed from Her Menses

This issue is a topic of discussion among the jurists. Allah SWT state in the Quran:

And do not approach them until they are pure

However, the verse is followed by:

And when they have purified themselves, then come to them from where Allah has ordained for you

Hence, the jurists discussed: Is the ruling of having sexual intercourse once the wife is purified from her menses becomes obligatory (wajib) due to the imperative clauses?

Then, the answer to these three questions is by observing the indications held by the imperative clauses that come after words of prohibition. The following, we share statement of Syeikh Dr. Abdul Karim Zaidan on this issue:

Same is for the issue of working and searching for provision (rizq) after Juma’h prayer which is also permissible (harus).

This is because, their opinion has no difference whether the imperative clauses come after the words of prohibition or without the presence of any prohibition words beforehand.

If the action is originally permitted, then its ruling is permissible, and if the action is originally wajib or mustahab, then it coincides with them. Dr Abdul Karim Zaidan also said: “It is clear for me that the last opinion is closer towards being acceptable. It is revealed by the istiqra’ (thorough inspection) towards the nusus (Al-Quran, hadith and other sources of ruling) which are warid that there are rulings of commandment and prohibition (different rulings upon this issue).” Refer to Al-Wajiz fi Usul al-Fiqh, Abdul Karim Zaidan (page 295-296)

To conclude, the chosen opinion is the ruling of the commandment of something that was prohibited before is referred back to its ruling before the prohibition even exist.

The same goes to the original ruling of jihad and battle for the sake of Allah when there is an order from the Muslim rulers, which is wajib. However, when months of haram start, Muslims are prohibited to have a battle during this time. Then, when the months passed, and there is an order to go for jihad, the ruling then becomes wajib again.

As a conclusion, we would like to state here that basically, all imperative clause holds the ruling of obligatory (wajib) if there is no qarinah (clue/connotation) which renounces the obligation.

While, imperative clauses that come after the prohibition of a particular action beforehand indicate that its ruling is referred back to the ruling before the prohibition exists.

Hence, based on the question asked, we hereby state that the ruling of a husband having sexual intercourse with his wife after she is cleansed from her menses is referred back to the ruling of the said action before the wife experiences her menses, which is permissible.

To end, may this explanation be helpful in giving the correct understanding for us in this religion. Ameen.