IRSYAD USUL AL-FEQH SERIES 35: THE DEFINITION OF JAHIL (IGNORANCE) AND ITS DIVISIONS 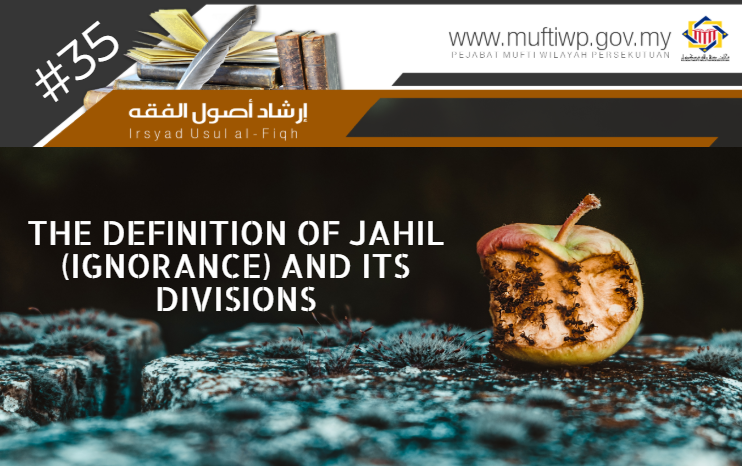 The definition of jahil (according to ahl al kalam; Islamic scholastic theology) is belief in something which is different from the reality or truth. Refer: Al-Mu’jam al-Wasith

According to Quranic and authentic prophetic evidences, there are condemnation against ignorance. Among them is a statement of Allah SWT:

“And turn away from the ignorant.”

Imam al-Qurthubi commented on the above verse stating: “The above verse prompt us to learn and attain knowledge and to turn away from cruel people, avoid disputes with the sufaha’ and distance ourselves from resembling the ignorant and foolish.” Refer: Al-Jami’ Li Ahkam al-Quran, Al-Qurthubi (7/309)

However, the verse does not mean to say that a knowledgeable person should avoid the ignorant and refuse to teach them and guide them to the truth. Consequently, the ignorant referred in the above verse are those who are cruel, commit transgressions and reject the truth that they hear.

Hence, Imam al-Thabari said: “This is the teaching from Allah SWT to all His creations (to turn away) from people who are cruel and commit transgressions and not to turn away from those who do not know his obligations and the rights of Allah SWT on him.” Refer: Al-Jami’ al-Bayan, Al-Thabari (13/327).

“He whose intention is to remove ignorance from himself and others.”

The author of the book Al-Mu’jam Al-Wasith states jahil basit is when someone’s ignorance does not affect others.

While Imam Ibn Qayyin said the meaning of jahil basit is: “(Someone who) do not have the knowledge, but at the same time do not create doubts otherwise.” Refer: Badai’ Al-Fawaid, Ibn Al-Qayyim (4/209).

This means, an ignorant person in this category do not possess the correct knowledge in a certain issue. However, at the same time he does not claim that he is on the right side and anyone that holds the opposite opinion is wrong. He does not create doubts or false understanding for others in the matter.

The definition of jahil murakkab is: “Someone’s ignorance that have a negative impact on others (where his ignorance harms others).” Refer Al-Mu’jam Al-Wasith.

According to Ibn Qayyim, jahil murakkab is the ignorance of leaders or renown figures with false opinions. Refer Badai’ Al-Fawaid, Ibn Al-Qayyim (4/209).

To conclude, we would like to state that jahil basit is not considered as a condemnation as long as it does not harm others, where his ignorance does not affect others.

While jahil murakkab is a criticized attribute. The reason is, it does not only affect himself but he also defends falsehood and consider it as the truth. Hence, the harms of it is multiplied and would even affect others.

Lastly, we pray that Allah SWT will always honour us with knowledge and protect us from arrogance towards the truth. Amin.