IRSYAD USUL AL-FIQH SERIES 36: RUKHSAH OR ‘AZIMAH; WHICH ONE IS PRIORITIZED? 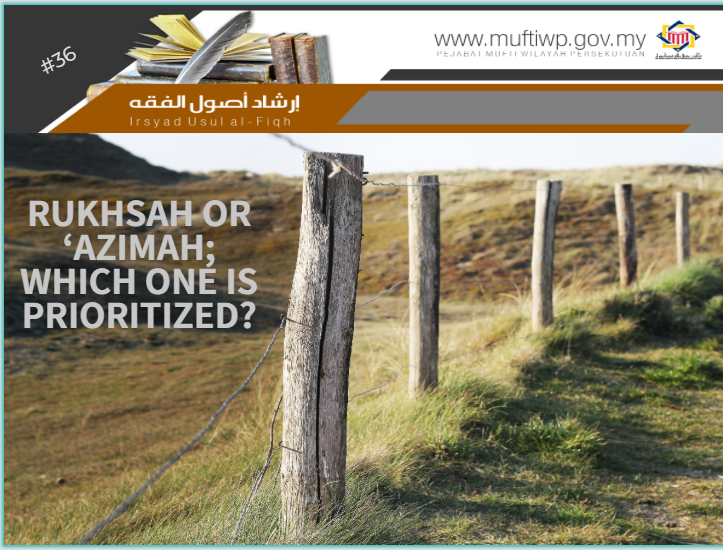 Before going further on this, it is important for us to explain first the definition of both terminologies meant to be discussed here:

Rukhsah or concession means rulings sanctioned due to hindrances and hardships. (Refer Al-Bahr Al-Muhit 1/262 and al-Muwafaqat 1/466). Some examples for rukhsah is the permissibility of shortening (qasar) four rakaats daily prayers into two during travelling and the permissibility of performing tayammum as a replacement of ablution (wudhu’) in the absence of water.

In this issue, the jurists have differing opinion:

The evidences of this opinion are as narrated by Ibn Umar RA where the Prophet PBUH said:

“Indeed, Allah tabaraka wa ta’ala loves when rukhsah from Him is applied, just as He hates it when transgression is done”

Riwayat Ahmad (5832), Ibn Khuzaimah (903) and al-Tabarani in Mu’jam al-Awsat. This hadith is categorized as sahih (valid) by Imam al-Suyuti and Syeikh Ahmad Syakir.

According to Imam al-Syaukani, the stated hadith is an evidence that leaving rukhsah indicates leaving obedience, and it is even said as equal to committing transgression.

"I said to 'Umar bin Al-Khattab: 'There is no sin on you if you shorten salah and if you fear that the disbelievers may put you in trial (attack you). But now the people are safe.' 'Umar said: 'I wondered the same thing, so I asked the Messenger of Allah (ﷺ) about that and he said: This is a favor from Allah (SWT) to you, so accept His favor."

This is based on the sayings of the Prophet PBUH and one of them is from the narration of Al-Aswad, where Saidatina Aisyah RAnha said:

"O Allah's Messenger (ﷺ)! The people are returning after performing the two Nusuks (i.e. Hajj and `Umra) but I am returning with one only?" He said, "Wait till you become clean from your menses and then go to at-Tan`im, assume Ihram (and after performing `Umra) join us at such-andsuch a place. But it (i.e. the reward if `Umra) is according to your expenses or the hardship (which you will undergo while performing it).

Based on the stated hadith, Imam al-Zarkasyi states that doing many acts of worship that comes with numerous hardships are prioritized in compared to others. (Refer Al-Manthur fi al-Qawa’id, 2/415). This also aligns with the legal maxim:

Imam al-Qarafi referred to the above Islamic legal maxim in his book, al-Qawaid (2/411) and (2/235). Meanwhile, Imam Suyuti also states something almost similar to this on the 19th maxim. (Refer al-Asybah wa al-Naza’ir, page 268).

According to Imam al-Syatibi, the application of ‘azimah is the qasd al-awwal (primary goal) of shari’ah, while rukhsah is the secondary goal. (Refer Al-Muwafaqat 1/539).

However, this apparently does not indicate that we are commanded to purposely torturing and burdening ourselves during worships. This is the reason why the Prophet PBUH said when he saw a man was supported by his two sons due to his nazar to walk to the Kaaba:

"Allah is not in need of this old man's torturing himself,"

Syaikh al-Islam Ibnu Taimiyyah in Majmu’ al-Fatawa (10/620-622) also states that the method of determining rewards is based on the level of hardships one is facing. It is in fact is not absolute, but depends on situations. The evidence is a hadith narrated by Jabir RA:

“It is reported that Allah's Messenger (ﷺ) went out to Mecca in Ramadan in the year of Victory, and he and the people fasted till he came to Kura' al-Ghamim and the people also fasted. He then called for a cup of water which he raised till the people saw it, and then he drank. He was told afterwards that some people had continued to fast, and he said: These people are the disobedient ones; these are the disobedient ones.”

While, according to Imam al-Nawawi and Kamal Ibn al-Humam, those hadiths which indicate that breaking fast is prioritized is only in the purpose of highlighting some conditions that made it worse for them to continue fasting, while ‘azimah remains as something prioritized rather than rukhsah. (Refer Al-Majmu’ Syarh al-Muhazzab 6/265).

Those who hold the opinion that ‘azimah and rukhsah both are in the same level based their opinion to a hadith narrated by Hamzah bin ‘Amr:

As for the case with the hadith through the narration of Ibn Abbas R.anhuma, where he said that the Prophet PBUH said :

This hadith is categorized as hassan by Imam al-Munziri and Imam Ibn Hajar al-Haithami.

In a hadith narrated by Abu Said al-Khudri RA, he said:

In the narration of Ibn Abbas R.Anhuma, he said:

"Allah's Messenger (ﷺ) set out from Medina to Mecca and he fasted till he reached 'Usfan, where he asked for water and raised his hand to let the people see him, and then broke the fast, and did not fast after that till he reached Mecca, and that happened in Ramadan." Ibn `Abbas used to say, "Allah's Messenger (ﷺ) (sometimes) fasted and (sometimes) did not fast during the journeys so whoever wished to fast could fast, and whoever wished not to fast, could do so."

Discussions on the Opinions and Disposition

Dr. Abdul Karim al-Namlah has listed out the arguments on this:

Through observation of these opinions, he inclines to state that it is impossible for us to determine the priority of one into another between ‘azimah and rukhsah in a definite comparison. This is because rukhsah is facilitation given by Allah SWT due to hardships and burden towards His slaves. It is something subjective and relative, also differs according to the persons individually.

It is possible that something which is hard for Zaid, but not a problem upon Umar. Hence, in this issue, it is prioritized for Zaid to practice the rukhsah, and it is the other way around for Umar. (Refer Al-Muhazzab fi ‘Ilm Usul al-Fiqh al-Muqaran, 1/459-462).

We are in the opinion of that the issue of priority between rukhsah and ‘azimah is referred back to the situation and condition of the mukallaf himself. There are situations where rukhsah be obligatory, like saying the words of kufur to save life, as well as eating pork in a desperate situation, like famine. There is rukhsah in the ruling of Sunnah, like shortening (qasar) the prayer during travel, for it was mentioned by the Prophet PBUH as a ‘gift’ from Allah SWT towards the believers.

We would also like to highlight here that for those who are able to continue fasting, then do so. If he takes the concession of breaking his fast, it actually contradicts with the greater priority (khilaf al-aula). However, if fasting causes harm to him, then it is prioritized for him to break his fast. This is the opinion of Syaikh al-Mahalli. (Refer Hasyiyah al-Banani ‘ala Syarh al-Mahalli ‘ala Jami’ al-Jawami’ 1/198)

There are also situations where breaking the fast is prioritized, especially on cases related to maslahah and the public good. For example, the story of the Prophet PBUH broke his fast during Fathu Makkah. If it is meant for anything related to maslahah, like wars, humanity missions and da’wah, then they face hardships due to fasting, then it is prioritized for them to break their fast to give them strength in completing their intended mission.

Ibadah shall be done in full effort so that Allah SWT will grant them with great rewards. However, if one intends on burdening himself while doing worship to get greater rewards, then this doing has no basis in Shari’a, and even is highly prohibited by the Prophet PBUH.

Lastly, we cite the opinion of Imam al-Izz bin Abd al-Salam where he said: If two actions are tangled with priority, and one of them contains masyaqqah, then both of them are in the same level of reward because their similarity is towards their glory. Meanwhile, the mere difference is on the masyaqqah stated by Allah. Hence, it is rewarded for the burden of masyaqqah (hardship), and not due to the masyaqqah itself. It is because, it is invalid for a person to get closer to Allah by these masyaqqah, for the closeness to Allah is in the form of glorifying him as the God.

May Allah ease our affairs by His blessings and rewards. We close this with a du’a:

"O Allah, nothing is easy but what you make easy; You can turn a mountain into a plain if you want to.”