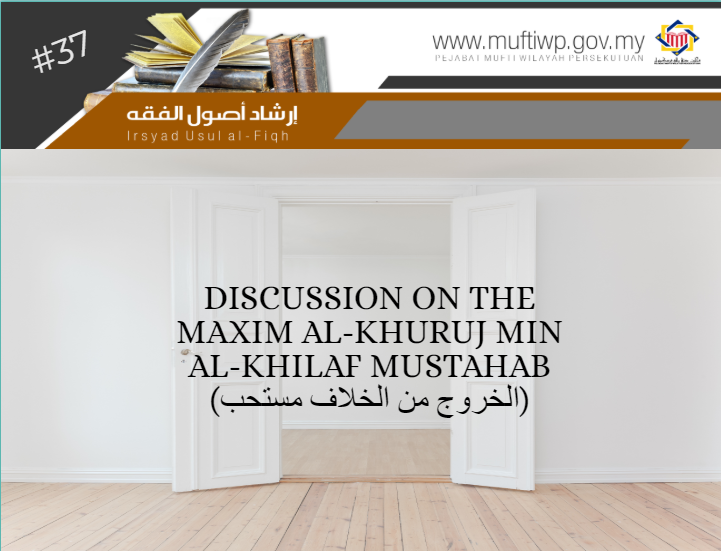 Assalamualaikum S.S Mufti. Can you give an explanation on a legal maxim which states that leaving khilaf is commanded?

The phrase al-khilaf as stated by Fairuz Abadi means “Disagreeing with another person in a particular matter, which means having conflicting opinion from him”. Refer Al-Qamus al-Muhith, al-Fairuz Abadi (1/251).

We are inclined to say that there is no difference between al-khilaf and al-ikhtilaf, in fact, the opinions which differentiate between these two revolve only around the terminologies. And a maxim says:

There is no discord on terminologies

The past companions always give their best to avoid khilaf by handling the issues with full equity and ethics. This is what is portrayed through the history when there was difference of opinion between Usman bin al-Affan and Abdullah Ibn Mas’ud related to shortening of prayer (qasar) for a traveler. Usman bin Affan was of the opinion of performing prayer by tamam (complete) while Ibn Mas’ud was of the opinion that the prayer should be performed by qasar. Yet, when Usman becomes the imam and Ibn Mas’ud was the ma’mum, Ibn Mas’ud followed him by performing prayer by tamam even when he held the opinion of qasar. So, when Ibn Mas’ud was asked pertaining the matter, he said:

Referring back to the question asked pertaining to the maxim الخروج من الخلاف مستحب which means walking away from khilaf is commanded. We state that it is an accepted and practiced maxim by majority of the Fiqh scholars.

Imam Tajuddin al-Subki said: “Among the famous maxim of the scholars in majority, which the jurists almost include it as an agreed maxim is; walking away from khilaf is prioritized and afdhal”. Refer Al-Asybaah wal-Nazhaair, Al-Subki (1/127).

We have alreasy published an in-depth discussion on the maxim ‘Mura’ah al-Khilaf’ in Irsyad Usul Al-Fiqh Siri Ke-7: Huraian Kaedah “Mura’ah Al-Khilaf” Serta Pengaplikasiannya (Irsyad Usul al-Fiqh Series 7: Elaboration on the Maxim “Mura’ah al-Khilaf” and Its Application) which can be accessed through the following link: https://bit.ly/31iXoCe

Some scholars state that there are some conditions on the process of harmonizing the khilaf. Among them:

The following we state some examples in explaining more on the maxim:

First: Retaking Ablution for Those with Salis al-Baul (Urinary Incontinence).

In this issue, the jurists have differing opinions on the ruling of retaking ablution for those with urinary incontinence. Some scholars like the Malikites are of the opinion that retaking ablution for these people for each prayer is Sunnah. While the majority of jurists other than the Malikites are of the opinion that it is wajib (obligatory) to retake the ablution for each prayer for those with salis al-baul except for jama’ prayers (so, it is not wajib to retake the ablution).

A woman with istihadhah in which she bleeds not on days (period) of haid (mensturation), she is the same as those who are pure. Except that she has to take ablution for each obligatory prayer after she cleanses her private part. The same for those who are tested with abnormal discharge of mazi and those with salis al-baul (urinary incontinence).

Hence, the way of avoiding the khilaf between the ruling of Sunnah or wajib to retake the ablution is by taking the most ahwath (safe and cautious) action, which is by retaking the ablution for each prayer to be performed for those with this issue.

The jurists (fuqaha’) have differing opinions on the ruling of tawaf wada’ for those performing umrah. Some state that the ruling is wajib (obligatory). This is the opinion held by the majority based on a narration by Ibn Abbas R.Anhuma where the Prophet PBUH said:

No one should leave (Mecca) until he performs the last circumambulation of the House (the Ka'bah).

Imam al-Nawawi said: “The most sahih opinion in our madhhab is tawaf wada’ is wajib and it obligates dam (fine) if abandoned”. Refer Al-Majmu’ Syarah al-Muhazzab, Al-Nawawi (8/284).

This is because, by looking into the dalil which obligates it, it refers to performance of hajj and not specifically for those who perform umrah.

Hence, for those performing umrah, then the effort of avoiding the khilaf between tawaf wada’ is Sunnah or wajib is by choosing the opinion which obligates (wajib) tawaf wada’ before leaving the holy land of Mecca.

Third: Wipe Over All Parts of the Head When Taking Ablution

In the issue of wiping head in the process of taking ablution, the scholars differ in term of which part of the head is obligated to be wiped. This is because, they have different opinion on the meaning of the following verse:

“…and wipe over your heads,”

The scholars have decided by consensus (ijma’) that wiping head is a fardh (requisite) in ablution. However, they differ on which part of the head is obligated to be wiped into several opinions as the following:

Among the arguments of this group is a hadith narrated by Abdullah bin Zaid R.A where he said:

Once Allah's Messenger (ﷺ) came to us and we brought out water for him in a brass pot. He performed ablution thus: He washed his face thrice, and his forearms to the elbows twice, then passed his wet hands lightly over the head from front to rear and brought them to front again and washed his feet (up to the ankles).

The argument used by this group is by stating that the phrase بِ in the verse refers to للتبعيض (some) only.

Hence, if one intends to avoid the khilaf in this issue is by wiping all parts of the head. This is because, the action would fulfil all different opinions on this.

Imam Izzuddin ibn Abd al-Salam divide the process of avoiding khilaf into some parts as follow:

As a conclusion, we state here that the application of the maxim Al-Khuruj min al-Khilaf is highly encouraged and would result in goodness on oneself. This is because one values the diversity of opinions by choosing the opinion which covers other opinions in a particular action.

Lastly, may Allah SWT bless us with the correct understanding for us in the religion. Ameen.