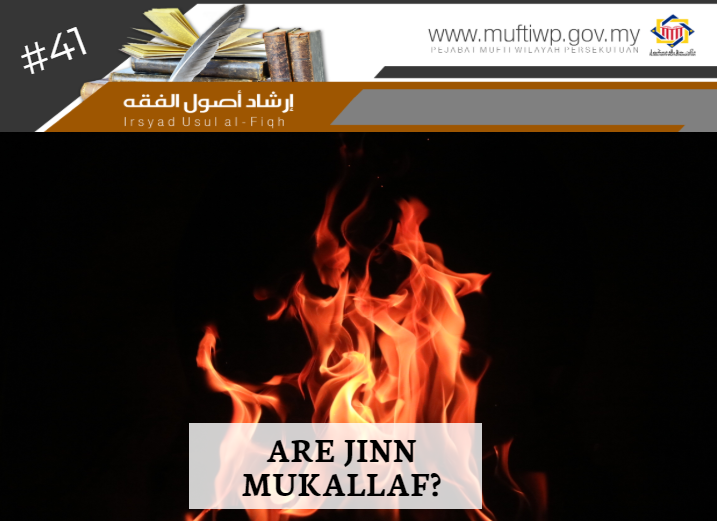 Assalamualaikum, ustaz. One question lingers around my thought is, are jinn also considered as mukallaf as humans do?

So, we cite the words of Imam Ibn Abd al-Bar which states: ‘Jinn according to the jamaah (scholars) is included under the mukallaf group which are also bound to the khitab (syarak)’. This is in accordance with a saying of Allah SWT in the Quran:

So which of the favors of your Lord would you deny?

Imam al-Razi in his comment on the above verse said: All scholars have decided that all jinn are mukallaf.

While al-Qadhi Abu Hassan al-Hassan Abdul Jabbar stated: We do not find any khilaf (differing opinions) among ahl al-nazhar pertaining the matter (that jinn are among the mukallaf). And al-Quran stated this in many verses.

Say, [O Muhammad], "It has been revealed to me that a group of the jinn… and we have believed in it. And we will never associate with our Lord anyone

Imam al-Qadhi Badr al-Din al-Syibli stated: This is among the verses which indicate their (the jinn) obligation to Shari’a rulings and the fact that they are obligated to follow the commandments and prohibitions. Refer Akaam Al-Marjan fi Ahkam Al-Jaan, Badr Al-Din Al-Syibli (pg. 63)

The same for the saying of Allah SWT:

And I did not create the jinn and mankind except to worship Me.

Hence, from the above verse, it is clear that jinn and humans are both obligated to follow the commandment to worship Allah SWT. This is as stated by Sayyidina Ali bin Abi Talib RA when explaining the meaning of the above verse, he said:

“And I did not create jinn and mankind except to command them to do worship.” Refer Al-Jami’ Li Ahkam Al-Quran, Al-Qurthubi (17/52).

Hence, when we say that jinn are mukallaf, the scholars have differing opinions on whether they are rewarded for their good deeds and blessed with the paradise while the disbelievers among the jinn are punished with hellfire? Here we share the opinions of some scholars pertaining to the issue:

First: There is no khilaf (differing opinions) among the scholars that the disbelievers among the jinn are placed in the hellfire. This is in accordance with the saying of Allah SWT:

But the word of your Lord is to be fulfilled that, "I will surely fill Hell with jinn and men all together."

Second: The opinion of the jumhur (majority of scholars) which states that the believers among the jinn will be rewarded with the paradise. Among the dalil is the saying of Allah SWT:

But for he who has feared the position of his Lord are two gardens –(46) So which of the favors of your Lord would you deny? –(47)

According to the above verse, khitab is intended towards these two groups; jinn and humans. Hence, this shows that whoever among the jinn and humans that fear their God will be rewarded with paradise. Imam al-Thabari in his tafsir said:

So which of the favors of your Lord, O jinn and humans would both of you deny?

Third: There is an opinion which states that the believers among the jinn will not enter the paradise. However, their reward is them being safe from the hellfire. Refer Al-Asybah wal-Nazhair, Al-Suyuthi (pg. 434).

When discussing on the issue of taklif for the jinn, the scholars also discuss the issue of a man marrying a female jinn. Here we cite the opinion of Sheikh Jamaluddin al-Isnawi where he said:

“It is impermissible for one to marry a female jinn based on the general meaning of two verses from Surah al-Nahl as the following:

And Allah has made for you from yourselves mates

The same for the saying of Allah in Surah al-Rum:

So, the scholars said when commenting on the two above verses, stated the meaning for both these verses is: (Your mate) is from among your kind and the same creation with you. Refer Akaam Al-Marjan Fi Ahkam Al-Jaan (pg. 114).

In conclusion, we would like to state that the jinn are also included among the mukallaf. This is in terms of that they are also obliged to follow the commandment and prohibition according to syarak in the teachings of Prophet Muhammad PBUH. Hence, there are groups of jinn which are mu’min (believers) and kufr (disbelievers). This means that the jinn are also divided; some will enter paradise and some to the hellfire.

We also state that when we hold the opinion that the jinn are mukallaf, it indirectly says that they also have the intellect to understand what is commanded and prohibited to them. In terms of intellect, it enables them to differentiate between the good and the bad. It is because, according to the science of usul al-fiqh, it is stated that مناط التكليف is the intellect.

Still, we should be clear that this issue related to the jinn are among the unseen. Our principle in the unseen is affirming it through the eyes of al-Quran and al-Sunnah al-sahihah. Hence, if there is no syarak’s explanation pertaining matters related to them, then we choose not to detail it. This is the same as the discussion on methods or ways they worship and etc.