IRSYAD USUL AL-FIQH SERIES 45: HOW SHOULD WE FACE EPIDEMIC AND ILLNESS ACCORDING TO THE PERSPECTIVE OF USUL AL-FIQH? 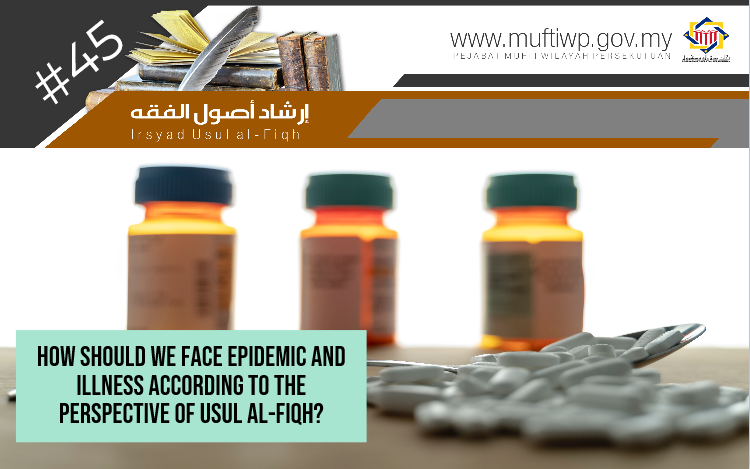 Assalamualaikum SS Mufti, what is the role of usul al-fiqh in helping us when we are faced with an epidemic and illness? Hope for an explanation.

As we know, usul al-fiqh is a science that involves dalil (evidences) and Islamic legal maxims. Thus, the science of usul al-fiqh helps a mufti or a jurist (faqih) in the process of deciding rulings on issues that involve a mukallaf.

Generally, when faced with an epidemic such as the plague or others, Islam emphasizes on the preventions steps that should be taken. Among the evidences that explained this matter is a hadith narrated by Sa’d Ibn Abi Waqas, he said the Prophet PBUH said:

"If you get wind of the outbreak of plague in a land, do not enter it; and if it breaks out in a land in which you are, do not leave it."

The above hadith clearly states the prevention step encouraged by the Prophet PBUH before and after a person is involved with any infectious diseases. In terms of if a person knows regarding the disease outbreak, then he should avoid from going to the infected regions. While if a person is in the region of the epidemic, then he should not leave the area to avoid the disease from spreading elsewhere. This is to avoid a greater harm as stated in a famous Islamic legal maxim:

Syeikh Mustafa al-Zarqa said: (What is meant by) celebrating the greater harm from both harms is by abandoning it. The reason is the meaning of celebrating a harm is by denying or rejecting it. Refer Syarah Al-Qawa’id Al-Fiqhiyyah, Syeikh Mustafa Al-Zarqa (pg. 201).

Basically, this maxim is supported by a statement of Allah SWT:

“As for the ship, it belonged to poor people working at sea. So, I intended to cause defect in it as there was after them a king who seized every [good] ship by force.”

According to the above verse, we find several important points that we simplify as the following:

Thus, coming back to the issue of preventing an epidemic or illness, the best step that should be taken is to prevent people from going in or out of the affected regions or also known as quarantine to avoid a greater harm.

Governments or body of authorities should take actions in handling the issues of the spread of epidemic considering the maslahah of the community taking into account the factors of local situations and communities. This is in accordance with an Islamic legal maxim which states:

“The management of the people by the government is bound with the maslahah.”

Moreover, the above maxim is the basis that Amirul Mu’minin Umar Ibn al-Khattab RA held in making his decision when he heard about an epidemic outbreak in Syria. There is a narration which states that Saidina Umar was headed towards Syria when he arrives at Sargh (a place near Syria which is situated between al-Mughitsah and Tabuk). As soon as he arrives there, he met a military commander Abu ‘Ubaidah al-Jarrah RA and his companion. They informed Umar that there is an outbreak in Syria. Then Saidina Umar said: “Call the muhajirin and al-Awwalin to meet me.” When they arrived, Saidina Umar discussed and told them about the disease outbreak in Syria. They disagreed. Some said, 'You have set out for something, and we do not think that you should leave it.' Others said, 'You have the companions of the Prophet, may Allah bless him and grant him peace, and the rest of the people with you, and we do not think that you should send them towards this plague.' Umar said, 'Leave me.'

Then he said, 'Summon the Ansar to me.' They were summoned and he asked them for advice. They acted as the Muhajirun had and disagreed as they had disagreed. He said, 'Leave me.' "Then he said, 'Summon to me whoever is here of the aged men of Quraysh from the Muhajirun of the conquest.' He summoned them and not one of them differed. They said, 'We think that you should withdraw the people and not send them towards the plague.' Umar called out to the people, 'I am leaving by camel in the morning,' so they set out. Abu Ubayda said,

'Is it flight from the decree of Allah?'

''Abd ar-Rahman ibn Awf arrived and he had been off doing something and he said,

'I have some knowledge of this. I heard the Messenger of Allah, may Allah bless him and grant him peace, say, "If you hear about it in a land, do not go forward to it. If it comes upon a land and you are in it, then do not depart in flight from it."

Thus, according to the above hadith, we can see that Saidina Umar with his capacity as the ruler make a decisive decision to celebrate the maslahah of each individual under his care and responsibility by distancing them from the place of the epidemic outbreak. This is also the lesson taught by the Prophet PBUH when the Prophet PBUH was informed by Farwah bin Musaik that there was an epidemic in Abyan. The Prophet PBUH said:

“Leave it, for destruction comes from being near disease.”

Thus, the knowledge of usul al-fiqh guides scholars to issue a prohibition for the Muslim ummah from going to places where there is a disease outbreak. This is in accordance with the prohibition in the Quran through the statement of Allah SWT:

“…and do not throw [yourselves] with your [own] hands into destruction,”

Furthermore, we could see that Islam also take steps after an epidemic or illness befalls a person with the commandment to seek treatment. This is based on the evidences and maxims related to this matter. Among them, in a hadith narrated by Usamah bin Syarik RA, he said, the Prophet PBUH said:

“Make use of medical treatment, for Allah has not made a disease without appointing a remedy for it, with the exception of one disease, namely old age.”

Thus, it is clear from the above commandment of the Prophet PBUH for a person who is ill to seek treatment. Generally, the commandment in the hadith shows that seeking treatment is sanctioned in Islam and it is mustahab (encouraged). However, in certain situations, seeking treatment can be wajib (obligatory) if it is known that the treatment is beneficial and if left it will result in great harm to the patient.

The same for life threatening diseases for a life of a human should be protected. This is in line with an Islamic legal maxim:

“Harm should be removed.”

As a conclusion, we would like to state that the knowledge of usul al-fiqh is important for jurists (fuqaha’) in formulating solutions according to syarak through the issuance of rulings which involves the issue of epidemic and illnesses, whether for preventive or treatment steps for it.

Lastly, we pray that Allah SWT will give us the correct understanding in religion. Amin.