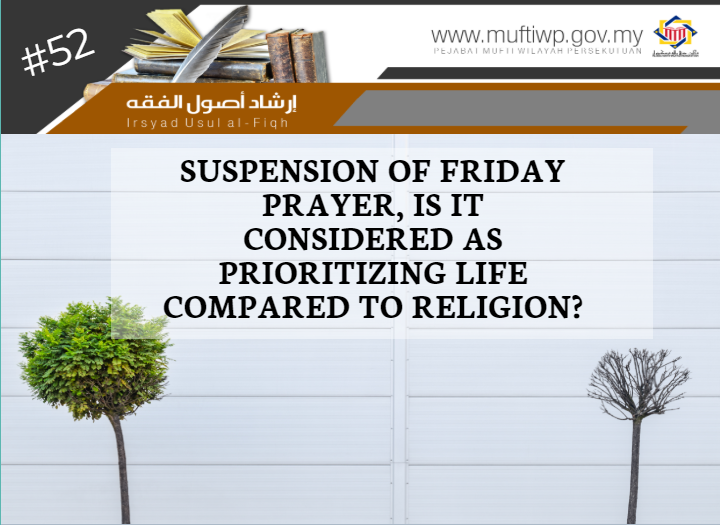 I have read and listen to the opinions of several parties who disagree with the step taken by the government and religious ministry to suspend the Friday and congregational prayers throughout the country. Among their arguments is the Maqasid Shariah which clearly places the protection of religion (hifz al-din) is of greater priority compared to the protection of life (hifz al-nafs).

I ask for an explanation on this matter, thank you.

Maqasid Shariah and Protection of Religion and Life

Generally, Maqasid Shariah can be defined as:

“Purpose, meaning and wisdom set by Islam’s shariah in the rulings sanctioned as well as the wisdoms behind it with the purpose to realize the maslahah of people.”

The divisions of Maqasid Shariah in terms of its importance to the maslahah of people is divided into three, which are al-Dharuriyyat, al-Hajiyyat and al-Tahsiniyyat. [1]

These are matters of which human life needs and depends on. If the matter is absent, then a person will have a hard time in this life and the hereafter.

Al-Dharuriyyat is further divided into five main bases (al-dharuriyyat al-khams), which are: protection of religion, life, mind, lineage and property. Every religious matter is built on these matters according to the priority set by scholars.

Hifz al-Din is defined as a general method (kulliy) which includes the determination of requisites and religious rulings in the lives and existence of humans and all the efforts in the denial of anything that contradicts the religion of Allah SWT such as disbelief, bidaah and others. Hifz al-Din is considered as the utmost importance among the five dharuriyyat. (Refer Nuruddin Mukhtar al-Khadimi, ‘Ilm al-Maqasid al-Syar’iyyah, pg. 81)

Generally, the concept of hifz al-Din includes two dimensions, which are the dimension of al-wujud (positive) and al-‘adam (negative). Among the examples for the al-wujud dimension is the sanctioning of iman (belief), pillars of worship such as prayer, hajj, fast and zakat. While examples of al-‘Adam dimension are the sanctioning of hudud for people who renounced Islam and the punishment of ta’zir for people who spread deviant and wrong teachings. (Refer Al-Muwafaqat, 2/18-19)

Whereas the concept of hifz al-nafs is the protection of life, which is the second most important principle according the priorities that need to be protected after religion. For example, Islam prohibit murder, whether it is suicide or murder of other people to protect life. The punishment of qisas, diyat or kaffarah are sentenced for those who commit murder whether it is with or without the intention of killing.

The Suspension of Friday and Congregational Prayers, Is It Considered as Prioritizing Life Compared to Religion?

Dr Syeikh Ahmad bin ‘Abd al-Salam al-Raisouni – the head of the World Union of Muslim Scholars – rejected the claim that the suspension of Friday and congregational prayers is a prioritization of hifz al-nafs compared to hifz al-din.

According to him, the original purpose (maqasid asliy) to hifz al-din is performing the prayer itself which is in the place of dharuriy and it is impermissible to be left in any type of situation. As for the Friday prayer, it is fardhu only for mukallaf men who is residing and in the position of hajiyyat or tahsiniyyat and not a dharuriyyat.

As for the outbreak of the COVID-19 virus we are currently facing, it is a life-threatening disease, thus, any policies or actions taken to avoid this outbreak is a true protection of life itself, and not just as a completion of the concept of hifz al-nafs. If there is a delay or postponement of the policy to curb or stop the spread of this disease, then it will lead to more deaths. [2]

This is similar to the situation where it is permissible to utter the words of disbelief when a person is forced to do so in order to protect his life. Allah SWT states:

“Whoever disbelieves in Allah after his belief... except for one who is forced [to renounce his religion] while his heart is secure in faith.”

It is also tsabit from Ibn Abbas R.Anhuma, the Prophet PBUH said:

According to the above hadith, basically a person is commanded to attend the congregational prayer if he hears the adhan. However, if he has an excuse, then he is exempted from answering the call to prayer. Furthermore, in another narration, the Companions asked the Prophet PBUH what is meant by excuse to not attend the congregational prayer? The Prophet PBUH replied:

Hence, it is clear from both hadiths that not performing the congregational prayer due to fear or illness does not mean that it is a prioritization of life compared to religion, however, it should be considered from the angle of maslahah and fiqh awlawiyyat (fiqh of prioritization).

Moreover, protection of life is actually an important precondition of the protection of religion, for without healthy and strong Muslims, surely Islam cannot be practised and conveyed to others. The Prophet PBUH himself once was crying while supplicating to Allah SWT during the battle of Badar:

“O Allah! If you destroy this band of adherents to Islam, you will not be worshiped upon the earth,”

To conclude, we would like to state that the suspension of the Friday and congregational prayers in mosques and surau definitely does not mean a prioritization of the protection of life (hifz al-nafs) compared to the protection of religion (hifz al-din). The reason is the majority of Usul Fiqh and Maqasid scholars stated that hifz al-din remains as the highest position compared to other dharuriyyats.

However, in our current situation of the COVID-19 outbreak where we are facing a true threat towards the lives of people and this is the original purpose (maqasid asliy) of the hifz al-nafs itself, while performing the Friday and congregational prayers are at the status of completion to hifz al-din. Thus, when these two matters collide, the one of higher status is prioritized compared to the lower status.

[1] For further explanation on the concept of Maqasid Shariah and al-Dharuriyyat al-khams, please refer to the following articles: