TASHIH AL-MAFAHIM #12: IS IT TRUE THAT IT IS NOT OBLIGATORY FOR AN OLD WOMAN TO WEAR THE VEIL? 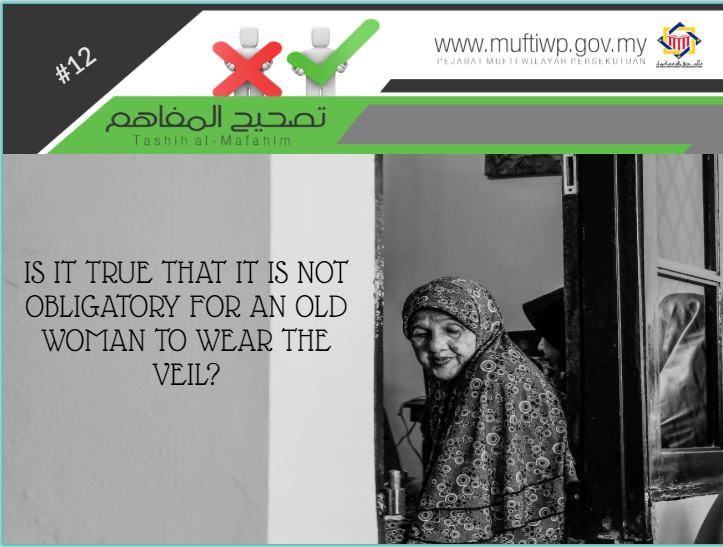 There are some people who claimed that an old woman is not obligated to wear the veil to cover her hair and head. Is this claim true?

Aurah is parts of the body that is prohibited to be seen by other man and woman. Refer al-Mausu’ah al-Fiqhiyyah al-Kuwaitiyyah (31/44).

A Muslim woman is obligated to cover their aurah as has been agreed by the scholars in accordance with the evidences from the al-Quran and al-Sunnah, as the following:

“O Prophet, tell your wives and your daughters and the women of the believers to bring down over themselves [part] of their outer garments. That is more suitable that they will be known and not be abused.”

“Woman is Awrah, so when she goes out, the Shaitan seeks to tempt her.”

Before we answer this issue, we should first analyse several matters regarding to the terms used in women’s clothing linguistically and according to syara’ in order for us to understand better the real meaning behind the Quranic verses revealed regarding this matter.

Imam Ibnu Kathir Rahimahullah states that al-khimar means anything that is used as a head cover. It gives the same meaning as al-khimar literally, which is a cloth worn by women to cover their heads. Refer Tafsir al-Qur’an al-‘Azim (6/46), Lisan al-‘Arab (4/254). In our society, al-Khimar is known as tudung (veil) to cover their head and hair, no matter what type of head covering it is.

Al-Jilbab literally means wide clothing worn by women where there is another clothing underneath to cover the clothing worn on top of it. Refer al-Qamus al-Muhit (pg.68)

The basis of the discussion of this issue is based on the statement of Allah SWT:

“And women of post-menstrual age who have no desire for marriage - there is no blame upon them for putting aside their outer garments [but] not displaying adornment. But to modestly refrain [from that] is better for them. And Allah is Hearing and Knowing.”

Thus, old women meant in the above verse refers to woman who could no longer do a lot of things due to her age, no longer menstruating and could no longer conceive a baby, where she will no longer be able to incite desire of men when they see her.

Scholars have different opinions regarding the real meaning of the word thiyab (ثِيَاب) in verse 60 from surah al-Nur:

First Opinion: The word thiyab in the above verse has the same meaning as al-jilbab (outer garment worn by women on top of the veil and other outer garments on top of her clothes). Then it is not sinful for an old woman to put aside her usually worn jilbab. This is the opinion of the majority of mufassirun from among the companions of the Prophet PBUH and the early generation of mufasirun such as Ibn ‘Abbas RA, Ibn Mas’ud RA, Ibn Umar RA, Mujahid, Sa’id bin Jubair, Muqatil bin Hayyan, Ibrahim an-Nakha’ie, al-Hasan al-Basri, Qatadah, az-Zuhri, al-Auza’ie Rahimahullah and others. This opinion is agreed by later mufassirun such as Imam ibn Jarir at-Tobari, Imam ibn Kathir, Imam al-Qurtubi, Imam al-Baghawi Rahimahullah. Refer Tafsir al-Qur’an al-‘Azim (6/84), al-Jami’ li Ahkam al-Qur’an(12/309), Ma’alim al-Tanzil fi Tafsir al-Qur’an (3/429), Jami’ al-Bayan fi Ta’wil al-Qur’an (19/216).

Second Opinion: The word thiyab in the above verse means al-khimar (also known as veil worn by our community today) and al-jilbab (outer garments worn by women on top the veil and other outer garments on top of her clothes). Thus, it is not sinful for her to put aside her jilbab and khimar (veil) which she usually wears. This is the opinion of ibn Umar RA, ‘Ikrimah, Sulaiman bin Yasar and Abdurrahman bin Zaid bin Aslam Rahimahullah. Refer Tafsir al-Qur’an al-‘Azim li ibn Abi Hatim (8/2641), Jami’ al-Bayan fi Ta’wil al-Qur’an (19/217).

In our opinion, the strongest and accurate opinion in this issue is it is obligatory for a woman who has reached an old age to wear the veil and cover her hair and head just like any other woman according to the Quranic and prophetic evidences.

Imam al-Nawawi Rahimahullah said: “As for the aurah of an old woman, Imam al-Ghazali states that it is the same as a young woman. The reason being, desire is something that is indeterminate and an old woman can still have intimate relationship with a man. Al-Qadi ar-Rauyani said: “If a woman has reached a really old age where she is safe from fitnah even when she is seen, then it is permissible to look at her face and both her hands (palms until the wrists), according to the statement from surah al-Nur verse 60.” Refer Raudhah at-Tolibin (7/24).

Regarding verse 60 surah al-Nur, the accurate commentary according to the opinion of the majority of scholars means that it refers to a woman who could no longer do numerous things on her own due to her old age, no longer menstruating, could no longer conceive and who are no longer attractive towards men.

As for the type of clothing that is permissible to be put aside for an old woman, it must fulfil the criteria of al-jilbab (outer garment worn by women on top of the veil and other outer garments on top of her clothes) and not al-khimar (veil worn by women to cover the hair and head) as claimed by certain people.

The opinion that states an old woman are no longer obligated to wear the veil is rejected for the following reasons:

Let us take the example of a Muslim woman living in the time of the salaf. They are concerned about protecting their dignity whilst they really understood the meaning of the Quran. They chose to protect their chastity the best they could by taking the best choice they have. This is the story of Hafsah binti Sirin Rahimahullah which was recorded by Imam al-Baihaqi Rahimahullah in his book, al-Sunan al-Kubra:

‘Asim al-Ahwal said, “We went to the house of Hafsah binti Sirin (who are an old woman at the time), then she quickly covers herself with jilbab. We then asked her, “May Allah SWT bless you, but haven’t Allah SWT states (surah al-Nur:60) “And any old woman who are sitting (no longer menstruating and could no longer conceive), who no longer has the desire to marry (anymore), then it is not sinful for her to put aside her clothes (jilbab), without exposing their adornment.” Then Hafsah ansked us back, “What is the continuation of that verse?” Then we recite it to her, “And protecting their chastity (by not putting aside her outer garments) is better for them.” Then Hafsah said: “It means continue wearing the jilbab (for it is better)”

May Allah SWT bless us with goodness and the correct understanding in learning His teachings and further give us the strength to practise it. Amiin.