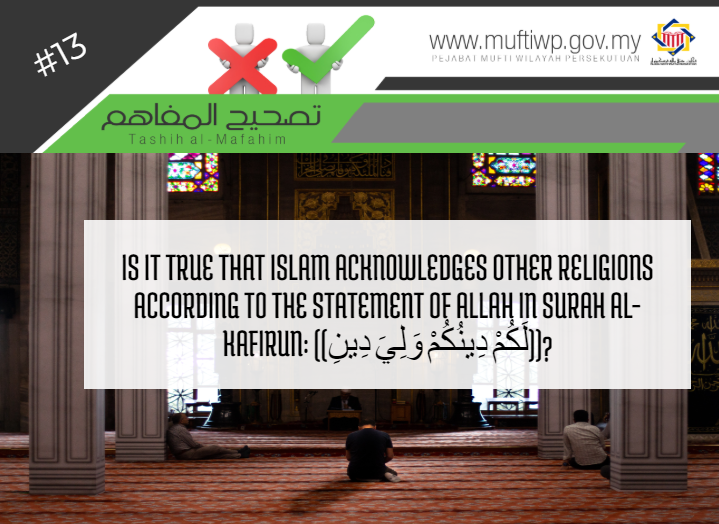 Assalamualaikum SS Dato’ Seri Mufti. There are some people in our community that claim Islam acknowledges other religions. They presented the verse of the Quran in Surah al-Kafirun ((لَكُمْ دِينُكُمْ وَلِيَ دِينِ)).

I hope to get an explanation from SS Dato’ Seri Mufti regarding this matter.

Al-Quran is revealed as guidance for the people of taqwa. Allah SWT states:

“This is the Book about which there is no doubt, a guidance for those conscious of Allah.”

Before we answer the question, we first refer to the commentaries and explanations made by the mufassirin (commentary scholars) regarding the real meaning of verse 6 of surah al-Kafirun.

Imam Ibn Kathir Rahimahullah said: “This surah is a commandment to leave the practises of the musyrik. Allah SWT states (قُلْ يَا أَيُّهَا الْكَافِرُونَ) which includes all disbeliever on the face of the earth, but this verse is especially revealed for the Quraisy disbelievers.

It is said that they are ignorant people who invited the Prophet PBUH to worship the idols for a year, then they will worship Allah for a year. Thus, Allah SWT revealed the surah commanding the Prophet PBUH to completely dissociates himself from their religion.” Refer Tafsir al-Qur’an al-‘Azim(8/507)

The Commentaries of verse 6 Surah al-Kafirun

“For you is your religion, and for me is my religion.”

“For us are our deeds, and for you are your deeds.”

Imam Abu Hayyan al-Andalusi Rahimahullah commented on verse 6 surah al-Kafirun stating: “For you is your idolatry or polytheism and me with my concept of oneness or monotheism.” Refer al-Bahr al-Muhit fi at-Tafsir (10/561)

Verse 6 surah al-Kafirun is not a form of acknowledgement towards religion other than Islam, but is a form of a threat and intimidation towards them, as stated by Allah SWT:

Ibn ‘Abbas R.Anhuma said: There is no surah in the Quran of which the iblis are more angry at, than this surah (surah al-Kafirun) for there is the commandment to uphold the concept of tauhid (oneness of Allah) and dissociating oneself from shirk.” Refer an-Nukat wa al-‘Uyun (6/358)

After analysing the interpretation of the mufassirun (commentary scholars) regarding surah al-Kafirun generally and the sixth verse of the said surah specifically, we found that it does not mean Islam acknowledges religion other than Islam, or even accepts their religion, consequently the verse is actually a firm threat for disbelievers and commandment for them to learn from Islam.

“Indeed, the religion in the sight of Allah is Islam.”

Imam Ibn Kathir Rahimahullah commented on the above verse, stating: “Allah SWT states that there is no religion that is accepted by Him from anyone except Islam.” Refer Tafsir al-Qur’an al-‘Azim (2/25).

We would like to advise all of us to not use the verses of the Quran according to our wants and desires without referring to the commentaries of renowned scholars. Refer to them for they are the experts in the field of understanding the real and accurate meaning and interpretations of this verse. Allah SWT states:

May Allah SWT give us goodness and correct understanding of His commandments and protect us from clear or vague disbelief. Amin.