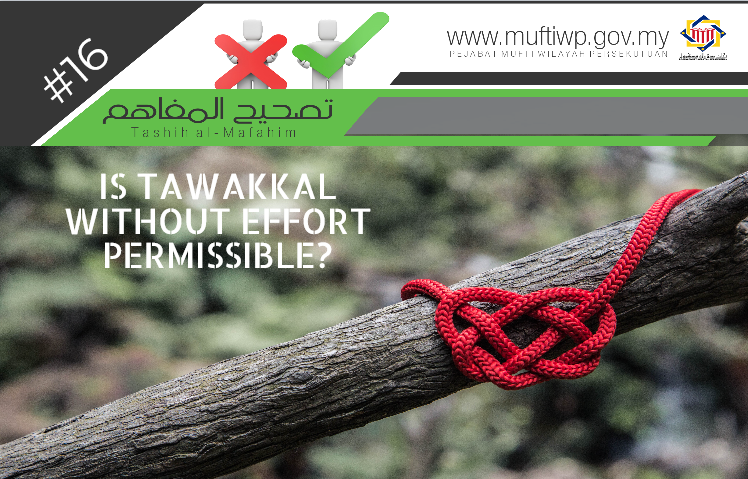 Assalamualaikum SS Datuk Mufti. Is it true that tawakkal without effort is permissible in order to attain what we want?

We will start with the meaning of tawakkal. Ibn al-Athir said, tawakkal means handing over all of our affairs to another or dependence on another. This is due to absolute belief towards another of whom the affairs are handed over to or the inability of handling the matter himself. (See al-Nihayah fi Gharib al-Hadith, 5/221)

Ibnu Rajab said that the truth of tawakkal is the true dependence of one’s heart in Allah SWT in obtaining the maslahah and rejecting harm regarding the worldly matters or the hereafter, handing over all of his affairs to Allah SWT, with a firm and strong faith that none could give, prevent, harm and benefit except Him. (See Jami' al-'Ulum wa al-Hikam, 3/1266)

“And whoever relies upon Allah - then He is sufficient for him.”

Ibn Qayyim explained: In the above statement of Allah SWT, it is not said that for those who relies upon Allah SWT there is so and so rewards for it. Instead, it is stated that Allah Himself will make it sufficient for him. If a person truly relies on Allah SWT, Allah SWT will open up an exit through the heavens and earth as well as all the creations in it of which are under His dominion. Allah SWT will make it sufficient and help those who rely on Him. (See Bada’i al-Fawa’id, 2/775)

Efforts Are Unnecessary When One Has Reliance (Tawakkal)?

Answering the above question, here we present a hadith narrated by Umar bin al-Khattab RA, where the Prophet PBUH said:

“If you were to rely upon Allah with the reliance He is due, you would be given provision like the birds: They go out hungry in the morning and come back with full bellies in the evening.”

In explaining the meaning of the hadith, Imam al-Munawi said: This shows that reliance is accompanied with effort and not without it. Reliance (tawakkal) is by putting in every effort that could lead to the desired outcome. The reason is even birds get their food for the day by putting the effort of going out looking for food. Thus, this is a guidance for us to go out and put in the effort for our sustenance.

Imam al-Suyuti quote the statement of Imam al-Baihaqi in Syu’ab al-Iman said: “This hadith is not the evidence for a person to relax and refuse to put in the effort to get one’s sustenance. Consequently, this hadith is evidence of the commandment to seek sustenance for the bird to go out and search for its sustenance.”

Imam al-Ghazali said: Reliance in Islam in not an escapism attitude for those who refuse to put in the effort or whose efforts failed, but reliance is a place of the return of efforts. Reliance is not idle waiting, put great effort which is followed by reliance to Allah SWT. Allah SWT is the One who will decide the outcome. (See Ihya’ Ulum al-Din, 2/65)

The Prophet PBUH commanded him to first put in the effort and then hand over his affairs to Allah SWT. Thus, effort is necessary accompanied by reliance to Allah SWT.

According to the above statements and discussion, it can be understood that true tawakkal (reliance) does not mean sitting idle and refusal to the effort of obtaining sustenance, consequently, true reliance is putting in every effort that is permissible to obtain sustenance.

Here, we state that the true meaning of tawakkal includes determination, resolve, strategy, great effort, supplication and lastly, contentment with the decision of Allah SWT. Consequently, if it fails, he will be patient. Surely, there are hidden wisdoms that transcend human minds.

May Allah SWT bless us with knowledge and understanding and make us from those who rely on Allah SWT with true reliance on Him. Amin.