TASHIH AL-MAFAHIM #17: IS ISRA’ AND MI’RAJ A TALE AS IT DEPICTS THE PROPHET PBUH’S WEAKNESS? 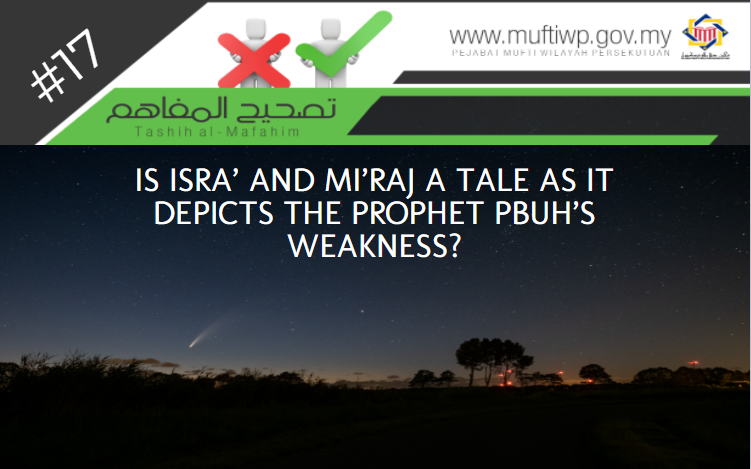 Assalamualaikum ustaz. I hope you are always in the best of health. I have a question which I feel in need of being presented and asked. I heard a man said that isra’ and mi’raj is a tale. He said that it is a tale because it depicts the Prophet PBUH’s weaknesses. He said imagine why the Prophet PBUH should follow Prophet Moses’s advice to decrease the numbers of prayer from 50 to 5. Just fulfill whatever is obliged. Unlike Prophet Abraham AS when he was commanded to slaughter his son, he quickly abide by it without questioning anything or negotiating for a decrease from Allah. This is what he told me. He also said that all of this while, the ustaz and scholars are wrong when telling on isra’ and mi’raj. Hope for an explanation from ustaz. I am a person with less religious knowledge especially regarding what was told by him. Thank you, ustaz.

Among the attributes of the believers is acknowledging and believing in the unseen. This is as mentioned by Allah SWT in the Quran:

Who believe in the unseen, establish prayer, and spend out of what We have provided for them,

The unseen like the paradise, hellfire, hereafter and etc. should be based on the saying of al-Quran or the authentic hadiths of the Prophet PBUH. It shall not be told or said without having any referral to these two sources. Any stories or telling on the unseen without having any sources whether from al-Quran or hadith will be considered as a fake or baseless news.

Exalted is He who took His Servant by night from al-Masjid al-Haram to al-Masjid al-Aqsa, whose surroundings We have blessed, to show him of Our signs. Indeed, He is the Hearing, the Seeing.

Syeikh Tohir bin ‘Asyur said that the journey of isra’ and mi’raj is an extraordinary event (a mu’jizat) in which the journey from the start to the end took only half a night. (Refer Tahrir Al-Ma’na Al-Sadid Wa Tanwir Al-‘Aql Al-Jadid Fi Tafsir Al-Quran Al-Majid, 14/10).

In fact, this event is only a test to those who testify that they believe in the Prophet PBUH. Whether they truly believe or not. This is stated by Allah SWT in the Quran:

And [remember, O Muhammad], when We told you, "Indeed, your Lord has encompassed the people." And We did not make the sight which We showed you except as a trial for the people, as was the accursed tree [mentioned] in the Qur'an. And We threaten them, but it increases them not except in great transgression.

Syeikh Amin al-Syanqiti said that Allah created everything which was showcased to the Prophet PBUH among the matters and events which are odd and astonishing on the night of isra’ and mi’raj as a test to the public. This is because there are among them who totally rejected what was said by the Prophet PBUH. Some even said that it was impossible to happen. They also said that how was the Prophet PBUH prayed in Baitul Maqdis and went through the seven layered of heavens as well as seeing it all in one night then be in Mecca the next morning. This is a test to those with doubt. (Refer Adwa’ Al-Bayan Fi Idhah Al-Quran Bi Al-Quran, 3/236).

So will you dispute with him over what he saw?

Excerpt from this lengthy hadith explains how the obligation of prayer 5 times a day was enjoined. Apparently, this story seems like depicting the weaknesses of the Prophet PBUH because he did not quickly obey with whatever was commanded to him. Especially when the Prophet PBUH went to ask Prophet Moses AS, unlike Prophet Abraham AS and his son who did not question much whatnot to ask for decrease for the command as claimed by some individuals then makes it a reason to say that the story of isra’ and mi’raj is a tale (fake).

However, such claim made by some individuals is a baseless claim.

In fact, what was done by the Prophet PBUH was to showcase his mercy and compassion as he did not want to see his nation become burdened. The Prophet PBUH even referred to Prophet Moses AS because the commandment of prayer was also enjoined to Bani Israil. This is mentioned by al-Qurtubi as cited by al-Hafiz Ibn Hajar al-Asqalani. Al-Qurtubi said:

So, this clearly shows that it does not mean the Prophet PBUH refused to obey the commandment of Allah. In addition, all the Prophets and Apostles are those the first persons to abide by the commandment. However, what was done by the Prophet PBUH indicates his mercy and taking into account the capability of his nation to obey what was obligated by Allah SWT. If even the nation of Prophet Moses AS had no capability to bear such command, whatnot Prophet PBUH’s nation. This matter surely will lead to neglect and even worse abandonment of the obligation. Therefore, the Prophet PBUH took into account what was said by Prophet Moses AS as a benchmark for his nation to be capable of performing the prayer and obey Allah’s order.

In another perspective, doesn’t it a wisdom from Allah that the lessening of prayer to 5 times a day makes this religion easier to be practiced? This aligns with what Allah SWT mentioned in al-Quran:

Allah does not intend to make difficulty for you

and has not placed upon you in the religion any difficulty

This matter I strengthened by other verse. Allah SWT says:

This is among the wisdoms that Allah SWT wants to highlight which is making the religion becomes easy to be practiced and not burdening. In fact, it is to showcase the attribute of this religion which is always pleasing and not burdening. Imagine if 50 times of prayer are performed, surely it will cause burden among the Muslims and causes negligence to other commandments especially towards governing the world. The lessening to 5 times of prayer a day makes Muslims become more productive and have no other reason to not perform the prayer.

In conclusion, the claim that the story of isra’ and mi’raj is a tale as it depicts the Prophet PBUH’s weaknesses is an absurd claim and deviate from the true fact. It is a mutawatir story which cannot be rejected. The story of isra’ and mi’raj specifically on the commandment of 5 daily prayers depicts Allah SWT’s decree so that this religion especially prayer which is the pillar of it becomes easy to be practiced, not burdening to the extent of it being abandoned.

May Allah drive us away from any syubhah and doubt upon matters which are thabit in the religion.