IRSYAD AL-FATWA SERIES 249: THE RULING OF CONSULTING WITH SHAMANS TO TREAT SORCERY 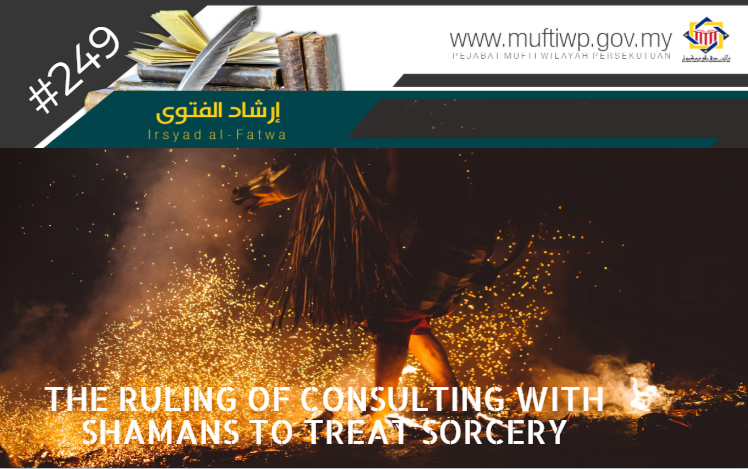 Can we meet or consult with shamans for the purpose of treatment or curing of illnesses due to sorcery?

Linguistically, sorcery in Lisan al-Arab is said as: A sorcerer made a lie or falsehood appear as the truth and describes something untrue as the truth. Thus, he has changed something from the actual fact. (See Lisan al-‘Arab, 4/348)

From Islamic view, according to Ibnu Qudamah: Sorcery is something that binds, charms, enchantments or words that is uttered or written or acted out that causes harm to the body of someone or his heart or his mind, without even touching the victim.

"Avoid the seven great destructive sins." The people enquire, "O Allah's Messenger PBUH! What are they? "He said, "To join others in worship along with Allah, to practice sorcery, to kill the life which Allah has forbidden except for a just cause, (according to Islamic law), to eat up Riba (usury), to eat up an orphan's wealth, to give back to the enemy and fleeing from the battlefield at the time of fighting, and to accuse, chaste women, who never even think of anything touching chastity and are good believers.

Imam al-Nawawi said: “Learning it (sorcery) and teaching it, then the ruling is, it is prohibited.” (See Muslim bi Syarh al-Nawawi, 14/176)

The Ruling for Consulting with Shamans to Treat Sorcery

Dr Wahbah al-Zuhaili in al-Fatawa al-Mu’asirah said: It is prohibited to went to see shamans whether it is for committing sorcery or treating sorcery. All of it is included in a Nabawi hadith as a form of shirk towards Allah SWT, through reliance and knowledge of the unseen or treatment of illnesses through a medium other then Allah SWT. (See al-Fatawa al-Mu’asirah, pg. 319)

Whoever that went to meet shamans and does not believe in them, his prayer is not accepted for forty nights. The Prophet PBUH said:

“He who visits a diviner ('Arraf) and asks him about anything, his prayers extending to forty nights will not be accepted.”

“If anyone resorts to a diviner and believes in what he says, he has nothing to do with what has been sent down to Muhammad PBUH,”

What should be understood is, sorcery can never be treated by another sorcery. The same goes with evil can never fight another evil. The only one that can treat it is Allah SWT. As have been told from the story of the Prophet Musa AS fighting against the pharaoh’s sorcerers, stated in the Quran:

“So, the magicians fell down in prostration. They said, "We have believed in the Lord of Aaron and Moses."

Ibn Kathir said: After the magicians saw what the Prophet Musa AS did, they themselves know everything about magic and sorcery and thus they are convinced that what the Prophet Musa AS did is not magic or any form of sorcery or deception or trick, and that it is something that is the truth and undoubted. It can only happen by the power of God that is able to just say be and it will be. That is the time when all the magicians fell down in prostration to Allah SWT and said: “We have believed in the Lord of Aaron and Moses.". (See Tafsir al-Quran al-‘Azim, 9/350)

The Usage of Recitations (Ruqyah) that Follows the Islamic Law

In this case, Islam has its own solution using ruqyah (recitation) from verses of the Quran and al-Sunnah in treating illnesses that is caused by sorcery. [1] Allah SWT states:

“And We send down of the Qur'an that which is healing and mercy for the believers, but it does not increase the wrongdoers except in loss.”

There is no problem with both the meanings of “al-syifa” (healer) as stated above. (See Fath al-Qadir, 3/300)

Imam al-Baghawi said: Ruqyah (recitations or enchantments) that is prohibited is ruqyah that has elements of shirk or stated within it the name of evil jinn, or ruqyah that is not in Arabic and the real meaning of it is unknown. This is due to the fact that it may contain shirk elements or it could lead to disbelief in Allah.

Meanwhile, ruqyah (recitation) using verses from the Quran and Zikrullah is permitted and is encouraged in Islam. This is due to the fact that the Prophet PBUH blow (recitations) over himself the al-Mu’awwizat surah (al-Ikhlas, al-Falaq and al-Nas). (See Syarh al-Sunnah, 12/159)

From Aisyah R.Anha, she said:

“Whenever Allah's Messenger PBUH became ill, he used to recite the Muawidhatan (i.e. the last two surahs of the Qur'an) and blow his breath over himself (after their recitation) and rubbed his hands over his body. So, when he was afflicted with his fatal illness. I started reciting the Muawidhatan and blowing my breath over him as he used to do and then I rubbed the hand of the Prophet PBUH over his body.”

In another narration from Abi Sa’id RA, he said when Jibril came to the Prophet and said: "O Muhammad! Are you suffering?" He said: "Yes." Then Jibril said:

We also elaborated here on the decision of the 33rd Fatwa Committee of National Council for Islamic Religious Affairs Malaysia’s meeting which met on October 11, 1993 on the Black Magic / Sorcery Practice:

Lastly, may Allah SWT keep us away from anything that could lead to shirk towards Allah SWT and bestow upon us the understanding in practising His commandments.

For more information regarding sorcery, we have answered about it before in Al-Kafi 253 : Islamic Standing Regarding Sorcery [2] and al-Kafi 557 : How to Treat Wife’s Illness Caused by Sorcery? [3].

[1] For the discussion on Enchantments and Its Ruling we have discussed it in  Irsyad Al-Fatwa Series 219 : The Ruling of Practising Enchantments from Ancestors: