AL-AFKAR #101: WHY IS THE CHAPTER ABOUT WIPING ONE’S KHUF IS EXPLAINED IN MATAN AQIDAH? 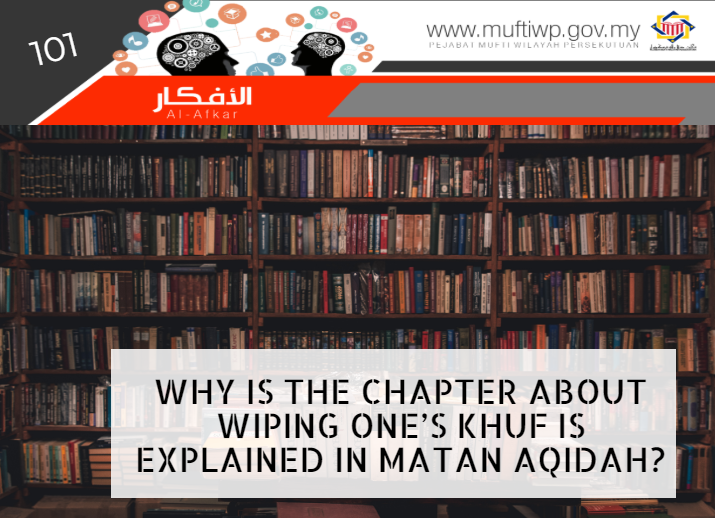 Why is the discussion regarding wiping the khuf is in matan aqidah? Isn’t it supposed to be in the fiqh category?

The Definition and Ruling of Wiping Khuf

Khuf is any leather shoes or footwear that covers the feet up to the ankles. Ankles is the protruding connective bone joining the foot and calves.

Wiping the khuf is a facilitation (رُخصَةٌ) that is permissible for both men and women in any situation, whether in summer or winter, travelling or residing, sick or healthy. The act is a replacement of washing one’s feet for ablution. (See al-Fiqh al-Manhaji, 1/241)

Among the evidences of the permissibility of wiping the khuf is according to a narration from Jabir bin Abdillah RA, he said:

“I saw that the Messenger of Allah (ﷺ) urinated, then performed ablution and then wiped over his shoes.”

“Act differently from the Jews, for they do not pray in their sandals or their shoes.”

Why is the chapter about wiping the khuf is discussed in matan aqidah?

“We believe in the permissibility of wiping the khuf when a person is travelling or present (resident or temporary resident) as it is tsabit through athar.”

Imam al-Nawawi said: The scholars have agreed (which means the opinions of those whose opinion is considered in determining the consensus) on the permissibility of wiping the khuf while travelling or residing, whether there is a need for it or otherwise. Those who contradict this opinion are from among the Syiah and Khawarij and their opinions are not considered. (Refer Syarh al-Nawawi ‘ala Muslim 3/160)

Cited from Imam Ahmad bin Hanbal, he once said: My heart is certain beyond any doubt about the permissibility of wiping the khuf, for there are 40 hadiths tsabit from the Prophet PBUH that narrates the Prophet PBUH perform it himself. Furthermore, Imam Ibnu Qudamah cited the opinion of Imam Ahmad in prioritizing the wiping of the khuf from washing the feet because it contradicts the people of bid’ah. (Refer Al-Mughni 1/206)

According to Imam Badruddin al-‘Aini, the Muslim ummah as a whole agreed with the opinion that said the Prophet PBUH wipes his khuf and only the people of bid’ah and the deviant do not accept this ruling, among them are the Khawarij and Syiah Rafidhah. Imam al-Hasan al-Basri said, he met with 70 of the companions of the Prophet PBUH who were in the Badr war and all of them acknowledged that wiping the khuf is tsabit from the Prophet PBUH.

Thus, Imam Abu Hanifah set that one of the conditions to be recognized as Ahlussunnah wal Jamaah is the belief in the wiping of the khuf. Imam al-Karkhi said: I’m concerned for those who do not believe in the permissibility of the wiping of the khuf would be considered as a disbeliever. (Refer ‘Umdah al-Qari Syarh Sahih al-Bukhari 3/97)

To conclude, we would like to state that the chapter of wiping the khuf is placed in the discussion of aqidah is because it is tsabit through mutawatir hadiths that should never be denied. Furthermore, the permissibility of wiping the khuf is denied by the people of bid’ah such as the Khawarij or Syiah.

As for Muslims who has never wiped the khuf, then this is not an issue and does not affect the aqidah of a person, as long as he believes the practice of the khuf is tsabit through the mutawatir hadiths which bring to the qath’ie ruling that cannot be denied.