AL-AFKAR #104: THE RULING OF ACCEPTING AND EATING FOOD IN CONJUNCTION WITH NON-MUSLIM RELIGIOUS CELEBRATIONS 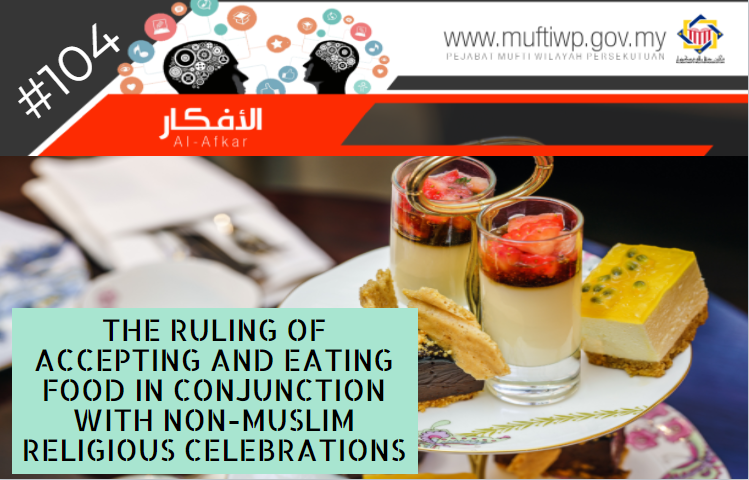 Sorry but I want to ask a question. I live in a residential area and on the left of my house is a Chinese who is a Buddhist and on my right is an Indian who is a Christian. Whenever they celebrated their religious celebrations, they would send me fruits, biscuits, sweets, chocolates, bread, KFC, McDonalds and others. In the spirit of unity, I would accept their gifts and eat them together with my family. My question is, is it permissible for us to eat the food given? Is accepting and eating the food considered as if I acknowledged their religion and celebrating together with them? Hope for the opinion from Mufti. Thank you.

Every Muslim is evaluated by Allah SWT through his deeds and actions. Furthermore, before these deeds or actions are performed, the main consideration is the intention of the Muslim himself. Regardless of whether it is a good or bad deed, it is surely preceded by one’s intentions. This is as stated by the Prophet PBUH in a hadith.

For the first question, it has already been answered in several of our articles and can be accessed through our official website and social media. The following are the list of related articles that has answered the issue for reference:

Thus, through our current research, we will discuss the second question which is “Is Accepting and eating food given a sign that a person agrees and celebrate the religious celebrations of non-Muslims?”

In answering this question, we present a hadith from Ibn Umar R.Anhuma, where the Prophet PBUH said:

Imam al-Hafiz Ibn Kathir said this hadith shows great prohibition and warning for anyone who resembles the disbelievers in terms of their speech, actions, clothing, celebrations, worship and others that is not sanctioned for us.

However, does accepting and eating food given on the day of their religious celebrations is considered as the act of tasyabuh?

To answer this question, we cited a story similar to this situation. During the times before Islam, there are two famous celebrations celebrated by the Zoroastrians. The celebration is called Nowruz / Nairuz / Niruz dan Mihrajan. After the arrival of the Prophet PBUH who brought Islam, Muslims are commanded to leave the celebration. It is replaced with two celebrations which are Eidul Fitri and Eidul Adha.

"The people of the Jahiliyyah had two days each year when they would play. When the Messenger of Allah (ﷺ) came to Al-Madinah he said: 'You had two days when you would play, but Allah (SWT) has given Muslims something instead that is better than them: the day of Al-Fitr and the day of Al-Adha.'"

It’s a glorious celebration celebrated by the Zoroastrians. Likewise, various food and dishes are prepared for the illustrious event.

However, one day a woman came and meet Saidatina Aisyah R.Anha to ask something:

“We have a Zoroastrian neighbour and when they celebrated their religious celebrations, they would gift some of it for us? Saidatina Aisyah R.Anha answered: “Don’t eat anything that is slaughtered that day, but eat from their trees (fruits).”

Likewise, it is stated in an athar from Abu Barzah:

“Abu Barzah lives in an area of the Zoroastrians, every time the Nowruz and Mahrajan was celebrated, his neighbours would gift him with food, then he said to his family: If they give us fruits then eat them, but if it is something else then return them.”

Hence, the conclusion from this issue is, it is clear from the athar that accepting and eating food given during certain religious celebrations is permissible on the condition that the food is not any animal that is slaughtered by non-Muslims. Furthermore, the intention of the person accepting and eating the food must not be to acknowledge nor uphold their religious celebrations.

The gifts in the form of food should be accepted with the intention of dakwah of which to soften their heart towards Islam. Moreover, Allah SWT has commanded us to do good and be fair towards the disbelievers who are not against the Muslims.