AL-AFKAR 110: THE RULING OF MUSLIM WEARING OR PUTTING UP ANY ORNAMENT RELATED TO CHRISTMAS 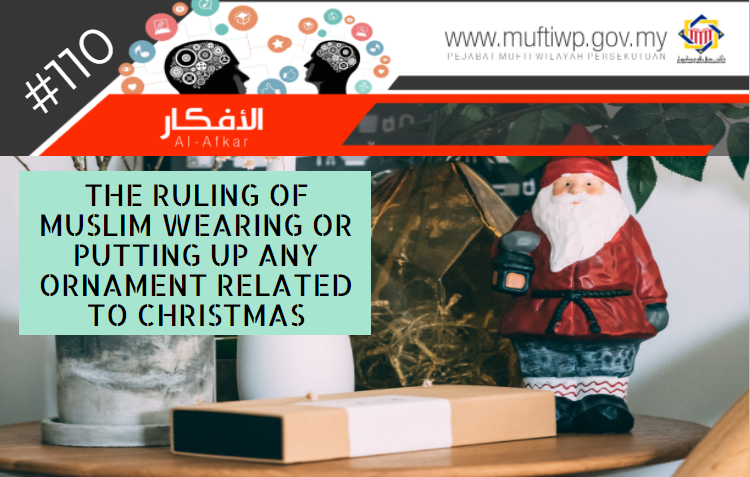 Assalamualaikum ustaz. I have a question which becomes an issue to this day. Since Christians will be celebrating Christmas in the near future, what is the ruling of Muslims wearing Santa Claus’s hat or putting up any ornaments significant to Christmas. I saw it in an office with no Christians; all their staffs are Muslims, but some of them wear Santa Claus’s hat. They even put up a Christmas tree in their office. Is this permissible? Hope for an explanation from ustaz.

Wearing Santa Claus’s hat or any ornament and apparel related to Christmas including putting up the Christmas tree is impermissible. There is no need to wear such clothing or ornaments because it sorts of an acknowledgement towards the celebration. If there is any invitation, the permissibility is limited only to a permissible boundary like dining. It is only a means to retain good relationship and not to acknowledge their faith and celebration.

It is undeniable that Allah SWT creates humans with variety of races and religions so that humans may know and understand one another. This is in accordance with the saying of Allah SWT in al-Quran:

O mankind, indeed We have created you from male and female and made you peoples and tribes that you may know one another.

“which is to get to know one another, not to deny one another. Censure, gibe, and gossip may lead to disunity” (Refer Al-Maraghi, Ahmad Bin Mustafa, Tafsir Al-Maraghi, Maktabah Al-Bab Al-Halabi Wa Awladihi, Mesir, ch.26 pg.141)

This is the basis of Fiqh Ta’ayush (Fiqh Co-existence) which means Fiqh related to existing/living at the same time or in the same place. Especially when we live together with people of other religions. However, this basis is only limited to human relationship with respect and understanding one another. A Muslim can never involve himself or even acknowledge any matters related to the belief of other religions in the name of Fiqh Ta’ayush. This is based on the principles stated by Allah SWT:

“For you is your religion, and for me is my religion."

Before answering the presented question, we should get to know the history of those symbols or ornaments used during the celebration of Christmas. For Christmas hat, it synonyms with the famous figure which is Santa Claus. Some claim that Santa Claus is Saint Nicholas; a prominent Christian pope who loves to give presents and cash money to the public. [2] The image of Santa Claus wearing red clothes and hat only emerges on 1881, which is illustrated by Thomas Nest. [3]

For Christmas tree, it holds a very long history. Most people choose the shape of Evergreen Fir Tree for this. It is usually used for winter festivals long before the advent of Christianity. For example, for Roman people, they use this tree on the festival of Saturnlia. While ancient Egyptians used it to worship the god of Ra. This tree was then brought by the Germans on the 16th century where Christians brought them home and decorated the tree. Martin Luther, the founder of Protestant also did a reform by also putting candles on the tree. [4] To this day, it becomes a symbol of Christianity as its triangular shape represents the concept of Trinity as believed by the Christians. [5]

Coming back to the presented question, basically, a Muslim is prohibited from imitating or wearing any symbols or clothing which hold significant relationship with other religion. This is in accordance with a hadith narrated by Ibn Umar that the Prophet PBUH said:

He who copies any people is one of them.

“The Prophet PBUH’s saying (not one of us) means he is not among us and those who follow our path. ‘He who resembles other than us’ means not among people of our religion.” (Refer Al-Mubarakfuri, Muhammad Abdurrahman, Tuhfah Al-Ahwazi Syarh Jami’ Al-Tirmizi, Dar Al-Kutub Al-‘Ilmiyyah, Beirut, ch.7 pg.392.)

“One shall not tighten a zunnar (a belt signifies zimmi) at the center of his waist or put on qalansawah (shawl) of the Majusi on his head” (Refer Al-Ansari,Zakariya Bin Muhammad, Asna Al-Matalib Fi Syarh Raudh Al-Talib, Dar Al-Kitab Al-Islami, ch.4 pg.119)

If wearing clothing which signifies other religion’s eminence is enough to be considered as tasyabbuh (resemblance), the greater is its prohibition when it is related to ornaments which becomes the symbol of certain religious celebration.

“What is truly intended on the second part which ruling is decided is on the prohibition of wearing tayalisah shawl. This is because it is the eminence for Jews or Christians. Hence, the most sahih is that Anas did not agree with a group of people who attended Juma’h prayer wearing tayalisah shawl due to the shawl worn by them has small round hole like the Jews’ shawl. The same for that it is the shawl worn by 70 thousand Jews who came with the Dajjal (antichrist) in which the shawl also has small round hole as explained in the hadith narrated by Imam Ahmad.” (Refer Ibn Hajar Al-Haitami, Ahmad Bin Muhammad Bin Ali, Tuhfah Al-Muhtaj Fi Syarh Al-Minhaj, ch.3 pg.38)

Through this explanation of Imam Ibn Hajar al-Haitami, we can understand that the prohibition takes place if the clothing or ornament has strong relation with eminence or symbol of other religions. This is also based on tafsir by the scholars upon the verse:

And [they are] those who do not testify to falsehood, and when they pass near ill speech, they pass by with dignity.

Imam al-Qurtubi mentioned several opinions of the scholars of tafsir upon this verse. Among them:

Therefore, in this issue, we view that wearing Santa Claus’s hat and putting up Christmas tree is not permitted if there is no need. This is because it is a sign or symbol which is synonymous to Christmas celebration. Especially if in the office or place, Muslims are greater in number.

The 68th Convention of the Fatwa Committee of National Council for Islamic Religious Affairs of Malaysia convened on 12th April 2005 had discussed on the Guidelines of Muslims Who Also Celebrate Religious Festivities of the Non-Muslims (Refer Kompilasi Pandangan Hukum Muzakarah Jawatankuasa Fatwa Majlis Kebangsaan Bagi Hal Ehwal Ugama Islam Malaysia pg.13-14). The Convention decided on several matters. Among them:

The ceremony does not come with actions contradict with Shara’: “contradict with Islamic creed” is a matter, action, words or situations which when done, it causes Muslims’ creed to be affected. For example:

The meaning of “contradict with the shara’” is a matter, action, words or situations which when done will contradict the Islamic teachings practiced by the Muslim community. For example:

In conclusion, wearing Santa Claus’s hat or any ornament and apparel related to Christmas including putting up the Christmas tree is impermissible. There is no need to wear such clothing or ornaments as it sorts of an acknowledgement towards the celebration. If there is any invitation, the permissibility is limited only to a permissible boundary like for dining. It is only a means to retain good relationship and not to acknowledge their faith and celebration.

For the issue of wishing Merry Christmas, we already explained it in the article Tahqiq al-Masail Series 7: Wishing “Merry Christmas” to Christians. [6]

May Allah bless us all. Wallahu a’lam.