AL-KAFI #1112: THE RULING OF NAZAR IN ONE’S HEART WITHOUT PRONOUNCING IT 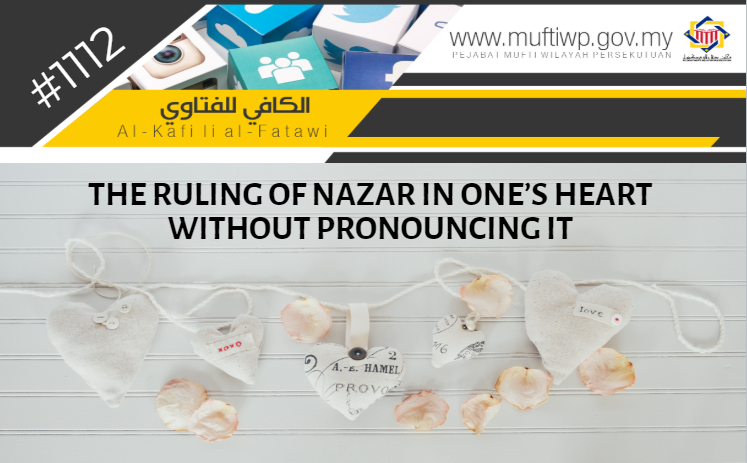 Once in my heart, when it was time for me to withdraw my savings from Employees’ Provident Fund (EPF), I intent to organize an event for the orphans. However, when the time comes, I’m hesitant to organize it due to my other financial commitments. Is it obligatory for me to fulfil my nazar, or is nazar only an obligation when it is said verbally?

Nazar is an obligation when it fulfils its conditions. Allah SWT state:

“Whoever vows to obey Allah, let him obey Him.”

In term of nazar, an issue arises; if someone just has the intention of nazar in his heart, is it considered as nazar?

Generally, for this issue, there are two opinions:

Imam al-Nawawi stated that this is the strongest opinion in this issue, and this is the opinion that has been agreed by scholars of madhab al-Syafi’e and the nazar is invalid if it is not said verbally or just an intention. (Refer: Al-Majmu’ Syarh al-Muhazzab, 8/451)

The same is stated by Imam al-Mardawi al-Hanbali where if someone has the intention of nazar without pronouncing it with words, then the nazar is invalid. He did not find any scholars of madhab Hanbali that contradict this opinion. (Refer: Al-Insaf fi Ma’rifati al-Rajih min al-Khilaf, 11/90)

In this issue, we are inclined towards the first opinion where it is not considered as nazar if it is just an intention in one’s heart, for nazar should be pronounced in words. This is in accordance with a hadith of the Prophet PBUH:

"Allah has accepted my invocation to forgive what whispers in the hearts of my followers, unless they put it to action or utter it."

This is the opinion of Dar al-Iftaa’ al-Misriyyah which can be accessed through the link: http://www.dar-alifta.org/ar/ViewFatwa.aspx?ID=13455&LangID=1 .