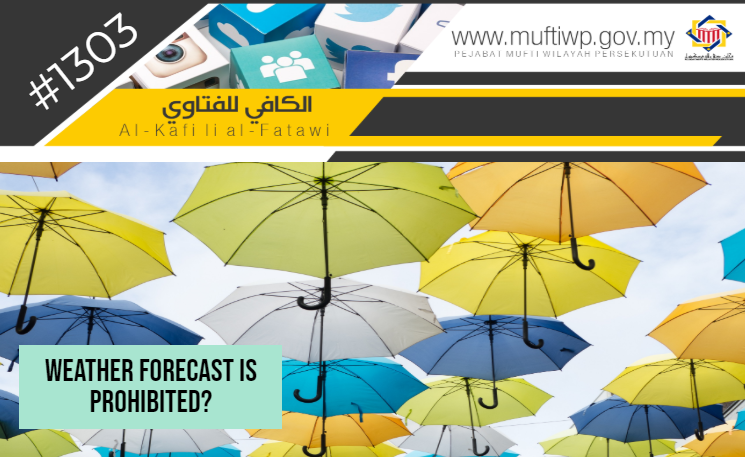 Is weather forecast considered as fortune-telling or divination which is prohibited in Islam?

No one knows of the unseen unless Allah ‘Azza wa Jalla. Allah SWT state in the al-Quran al-Azim:

“He who visits a diviner ('Arraf) and asks him about anything, his prayers extending to forty nights will not be accepted.”

It is clear from the above evidences that divination involving the matters of the unseen and fortune telling is prohibited in Islam.

Can it be analogically deduced (qiyas) that weather forecast is the same as divination?

In this issue, the scholars have discussed it and present their opinions:

Meteorologist and climate determine the weather forecast by observing the signs of the movement of the clouds and the wind, which is sunnatullah set by Allah. However, these forecasts are just their projection according to research and not a hundred per cent certainty (jazam).

For a Muslim, we believe that Allah SWT has the right to do as He want and to Him are where all things return to. The time of which it will rain is unknown except by Allah SWT and this is the reason why we see how weather forecasts are often wrong. (Refer: Fatawa Syeikh Nuh ‘Ali Salman chapter ‘aqidah, number 13)

The knowledge regarding the movement of the clouds or weather forecast and the time of rain is subjected to sunnatullah al-kauniyyah and it is included as the zhanni knowledge which is determined through scientific theory and experimentation which is not a hundred per cent certain. Thus, this is why weather forecast may or may not be true. (Refer: Fatawa al-Lajnah al-Da’imah li al-Buhuth wa al-Iftaa’, fatwa number 4667)

The same argument and opinion are given by Almarhum Syeikh Soleh ibn ‘Uthaimin, where he rejects the claim that weather forecast is among the matters of the unseen. (Refer: Al-Qaul al-Mufid ‘ala Kitab al-Tauhid, 1/531-532)

Syeikh al-Islam Ibn Taimiyyah when writing regarding natural phenomena such as a lunar and solar eclipse or the interchanging seasons such as summer and winter is not considered as the matters of the unseen that is only known by Allah SWT, but it is under the knowledge of mathematics. (Refer:  Al-Fatawa al-Kubra, 4/424)

To conclude, weather forecast (meteorology) is not the same as divination, fortune-telling such as zodiac signs (astrology) which leads to shirk and disbelief.

Weather forecast is a form of research by people to plan their daily lives. It does not force us to believe the information it gives and we are well aware that it is just a projection according to mathematics and could not be a hundred per cent true.

This varies greatly from the practice of divination or fortune-telling, where it is not based on any acknowledged methods but just blind trust on the fortune teller and asking the help from unseen creations, spells and enchantments that worship the shaytan.