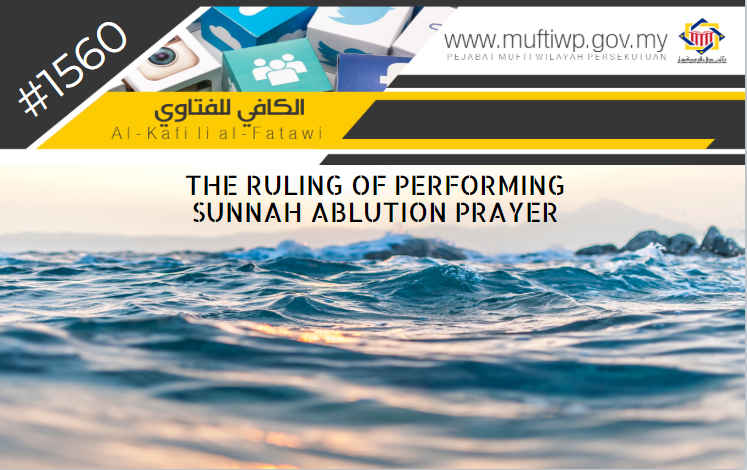 Sunnah ablution prayer is one of the sunnah prayers that is sanctioned and tsabit according to syarak based on several prophetic evidences. This is according to a hadith narrated by Abu Hurairah RA where he said the Messenger PBUH asked Bilal bin Rabah:

"Tell me of the best deed you did after embracing Islam, for I heard your footsteps in front of me in Paradise."

"I did not do anything worth mentioning except that whenever I performed ablution during the day or night, I prayed after that ablution as much as was written for me."

The above hadith explains among the benefits of performing sunnah ablution prayer is a person will be placed in paradise of Allah SWT. Furthermore, Syeikh Badruddin al-Aini in his commentary on the above hadith said: “Indeed, Bilal will enter paradise and attain this benefit for his action of performing ablution every time he experiences hadas and praying two rakaat every time he performs ablution.” Refer Umdah Al-Qari, Al-‘Aini (7/08).

His statement is strengthened by another hadith narrated by ‘Uqbah bin ‘Amir al-Juhani RA, he said, the Messenger PBUH said:

“Any one performs ablution and performs the ablution perfectly and then offers two rak’ahs of prayers concentrating on them with his heart and face but paradise will necessarily fall to his lot.”

Likewise, it is stated in a hadith narrated by Utsman bin ‘Affan, he said, the Messenger PBUH said:

Imam al-Ramli from among the al-Syafi’iyyah scholars used the above hadith when explaining the sanctioning of sunnah ablution prayer saying: Two rakaat for ablution is sunnah; it is when a person prays after performing ablution with the intention to pray a sunnah prayer. Refer Syarah Zubad, Al-Ramli (pg. 48).

To conclude, we would like to state that it is sunnah to perform two rakaat after ablution and its sanctioning is tsabit according to the evidences we have stated above and it is prioritized to be performed right after the person completes his ablution. It should also be explained that if a person just performs ablution then enters the mosque, then for example, he prays the obligatory zohor prayer or the sunnah tahiyyatul masjid or sunnah rawatib qabliyyah, then all of these are sufficient for the two rakaat ablution prayer.

Lastly, we pray to Allah SWT to be given true understanding in the religion. Amin.