AL-KAFI #1571: THE RULING OF A PERSON ATTENDING WALIMAH (WEDDING RECEPTION) OF WHICH HE IS NOT INVITED TO 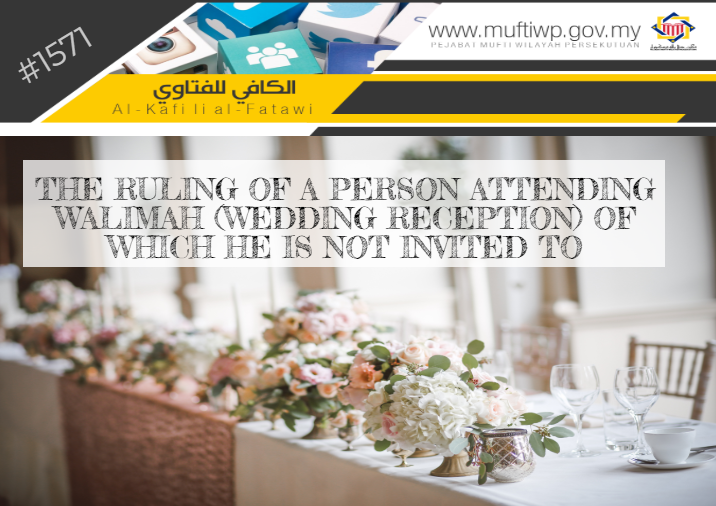 What is the ruling of attending a wedding or walimatul urus without being invited and eat the feast prepared?

The original ruling of attending walimah when one is invited specifically is wajib according to majority of the scholars from madhhab Maliki, Shafi’e and Hanbali. This is in accordance with a hadith from Ibn Umar RA where the Prophet PBUH said:

When any one of you is invited to a feast, he should attend it.

Hanafi madhhab and an opinion of Shafi’e and Maliki madhhab state that the ruling of attending walimah is Sunnah. While there is a different opinion in Hanbali and Shafi’e madhhab which state that it is fard kifayah and it is enough if it is being attended by part of the community. (Refer Al-Mausu’ah al-Fiqhiyyah al-Kuwaitiyyah 45/235-236).

Attending walimah without being invited

It is decided by the scholars of four madhhabs (Hanafi, Maliki, Shafi’e and Hanbali) that it is haram to attend wedding if he is not invited, or when one is unsure whether the host welcomes him or not. He is considered fasiq in term of eyewitness and a dishonor if one repeats the action as it is categorized under eating haram foods. This is as stated in a hadith narrated by Abdullah bin Umar R.Anhuma:

He who does not accept an invitation which he receives has disobeyed Allah and His Apostle, and he who enters without invitation enters as a thief and goes out as a raider.

The same is for a hadith narrated by Abu Mas’ud R.A which state:

An Ansari man, called Abu Shu'aib, came and told his butcher slave, "Prepare meals sufficient for five persons, for I want to invite the Prophet (ﷺ) along with four other persons as I saw signs of hunger on his face." Abu Shu'aib invited them and another person came along with them. The Prophet (ﷺ) said (to Abu Shu'aib), This man followed us, so if you allow him, he will join us, and if you want him to return, he will go back." Abu Shu'aib said, "No, I have allowed him (i.e. he, too, is welcomed to the meal).

It is clear from this hadith of Abu Mas’ud that even though one originally cannot attend to eat in a feast or walimah without being invited. However, if the host gives permission, or it is known that there is permission from the host, then it is permissible.

Consequently, the scholars prohibit one attending a feast without being invited, if it is sure that the host will not be pleased with him.

While if it is sure that the host is pleased by us attending, for example, one is a friend or relative and there is no enmity between them, but the host only forgets to invite him or her, then, in this situation, it is not haram to do so.