AL-KAFI #1574: THE RULING OF PRIORITIZING OTHERS FOR THE FIRST SAF 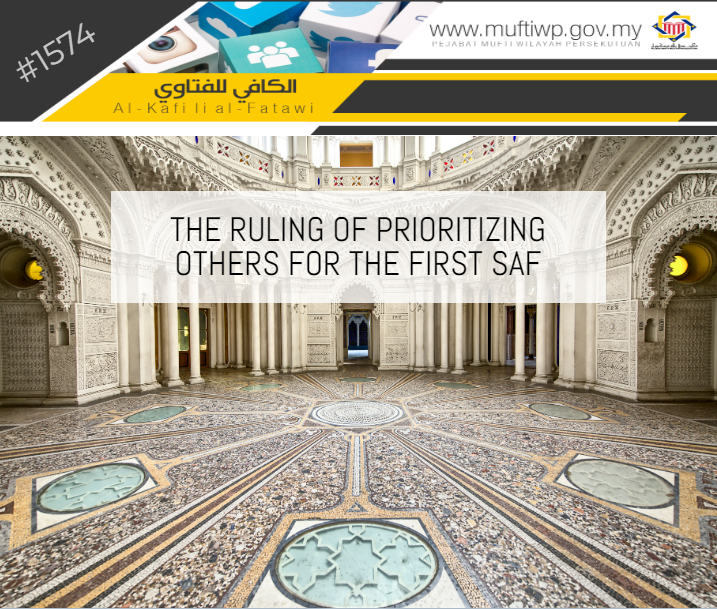 Assalamualaikum Sahibus Samahah Mufti. I want to ask what is the ruling of a person prioritizing others for the first saf compared to himself?

Ibn Kathir in his commentary state that the meaning of hastening towards the forgiveness of Allah SWT is encouraging them to do good and race in obedience and deeds to get closer to Allah SWT. (Refer Tafsir Ibn Kathir, 3:183)

"Prayer in congregation is better than the prayer of a man by himself by twenty-seven degrees."

More so if the person performs the congregational prayer in the first saf. In a hadith narrated by Abu Said al-Khudry RA, he said:

The Messenger of Allah (ﷺ) saw that some of his Companions tended to stand in the rear, so he said: “Come forward and follow me, and let those who are behind you follow your lead. If people continue to lag behind, Allah will put them back.”

“If the people were to know what excellence is there in the Adhan and in the first row, and they could not (get these opportunities) except by drawing lots, they would have definitely done that.”

Coming back to the question asked, the act of prioritizing others over himself is known as ithar (الإيثار). It is a commendable act according to the statement of Allah SWT which praises the Ansar who prioritizes the Muhajirin compared to themselves. Allah SWT states:

“And [also for] those who were settled in al-Madinah and [adopted] the faith before them. They love those who emigrated to them and find not any want in their breasts of what the emigrants were given but give [them] preference over themselves, even though they are in privation. And whoever is protected from the stinginess of his soul - it is those who will be the successful.”

However, fiqh scholars specify that the act of prioritizing others (ithar) is only commendable in worldly matters such as wealth, food and drink. While ithar in matters of worship is makruh (undesirable) and not sunnah. This is in accordance with the Islamic legal maxim:

Prioritizing others in matters of worship is makruh, while ithar in other matters is commendable. (Refer al-Asybah wa al-Nazhair Lil Suyuti, 1:117)

Imam al-Nawawi also explained it in syarah Sahih Muslim, where he states:

Scholars of madhhab al-Syafi’e and others said that it is impermissible to prioritize others (ithar) in terms of worship. While commendable ithar is for what a person wants which is not a form of obedience. They said: “It is makruh to prioritize others for the first saf, the same is applicable for other similar situations.” (Refer Syarh al-Nawawi ala Sahih Muslim, 7:170)

According to the above discussion, we conclude that it is makruh to prioritize others over oneself for the first saf. The reason is we should race in doing good and worship for ourselves first compared to others according the statement of Allah SWT and the hadith of the Prophet PBUH stated above. This is in accordance with the Islamic legal maxim:

Prioritizing others in matters of worship is makruh, while ithar in other matters is commendable. (Refer al-Asybah wa al-Nazhair Lil Suyuti, 1:117)

Thus, we should hasten to fill the first saf in prayer and strive to be among those who are in the first saf for congregational prayer to gain the great rewards offered by Allah SWT. May Allah SWT give us the correct understanding in His religion and guide us to be able to perform worship with sincerity only for His sake. Amin.