AL-KAFI #1650: CLAIMING ARREAR MAINTENANCE AS DEBT FROM THE INHERITANCE LEFT BY THE DECEASED 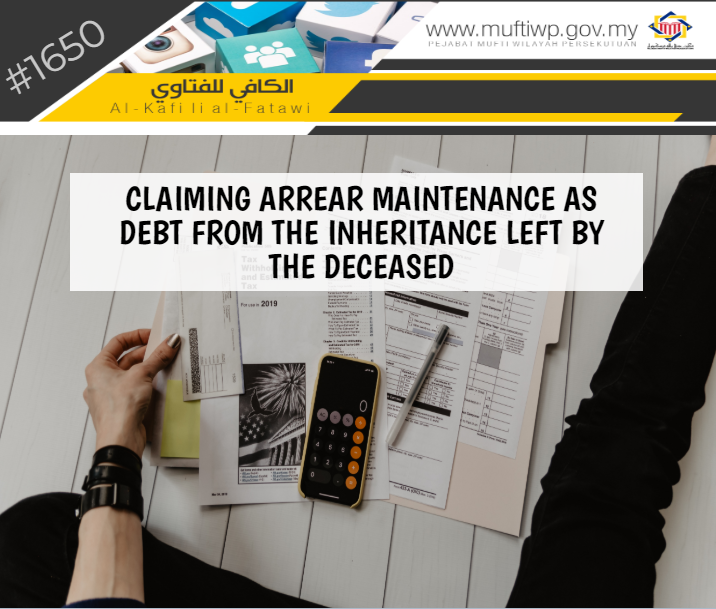 A husband neglected the maintenance of his wife for years. When the husband passes away, can the arrear maintenance be considered as something the husband owed to the wife (debt)? Is it permissible for the wife to claim her maintenance rights from the inheritance her husband left before it is divided through afraid?

As the mukadimah, we will present the evidence that sanctions the obligation of a husband to provide maintenance for his wife and children. In a hadith from Jabir RA, the Messenger PBUH said:

Further reading on the matters of maintenance, please refer to our previous article:

The madhhab’s jurists discussed on arrear maintenance. The majority of jurists are of the opinion that the arrear obligation of maintenance for one’s children is abrogated if the father has fulfilled the needs of his child after the time for it passes. This is different from the maintenance of his wife where it is considered as a debt of the husband towards his wife even after the time has passed according to the majority of scholars with the exception of the Hanafi scholars. (See al-Fiqh al-Islami wa Adillatuhu, 7 /816, 829)

According to the act, arrears of unsecured maintenance throughout the duration of marriage will be considered as debt on the husband. Debt should be settled even after the death of the debtor. Thus, the debt is included under the matter which is wajib to be settled before the division of the inheritance through faraid. This is clear in the statement of the Prophet PBUH:

"I am closer to the believers than their own selves. Whoever dies and leaves behind a debt, I will pay it, and whoever leavers behind wealth, it is for his heirs."

According to the above hadith, when a person dies, then the inheritance he left should be divided to his heirs through faraid after the obligations on the inheritance are fulfilled which includes the costs for the management of the body of the deceased (including the funeral), settlement of his debts and will.

For further information related to the division of inheritance, please refer to our previous articles:

al-Kafi #1224: Issues Regarding the Division of Property and Cash

al-Kafi #1463:  Is it Permissible to Divide the Inheritance of a Deceased Without Following the Faraid?

al-Kafi #1472: The Ruling of Using the Inheritance to Cover the Costs for the Management and Division of Inheritance

To conclude, in our opinion arrear in maintenance for a wife that was unfulfilled is considered as debt on her husband according to the majority of scholars. Thus, it is wajib to be settled using the inheritance left by her husband before it is divided through faraid. Thus, the case of arrears in maintenance or matrimonial assets can be claimed in the Shariah Court. Hopefully, this explanation will give an understanding to our society. Amin.