AL-KAFI #1733: SHOULD A GOLD BAR BE COMBINED WITH CASH (MONEY) TO SUFFICE THE NISAB FOR ZAKAT? 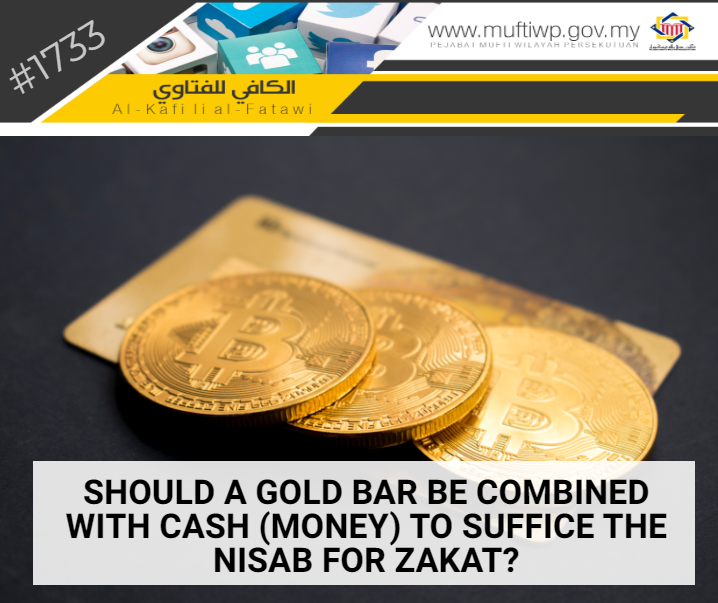 Assalamualaikum SS Mufti. I have a question regarding zakat.

Is zakat applicable for a person who has a gold bar (that does not reach the nisab), but when combined with his cash (money) in the bank (his savings), it suffices the nisab? Confusion arises because I feel that gold and cash money are in two different categories. Hope for an explanation.

Gold and cash money are both in the same category which is a medium of exchanging things and has the power to buy something. Hence, both items (gold and cash money) should be combined and if its value exceeds the nisab, it is wajib for the person to pay zakat once altogether, and there is no need of different payment.

Zakat is one of the five pillars of Islam which are obligated by Allah SWT upon Muslims. The jurists explained that zakat is an obligatory sadaqah (donation). This is in accordance with the saying of Allah SWT:

Take, [O, Muhammad], from their wealth a charity by which you purify them and cause them increase, and invoke [Allah 's blessings] upon them. Indeed, your invocations are reassurance for them. And Allah is Hearing and Knowing.

Dr Wahbah al-Zuhaili stated in his book that the jurists are of the opinion that sadaqah meant in this verse is zakat which is obligated to all human being. (See: Tafsir al-Wasit li Zuhaili: 1/913)

The Obligatory Conditions for Zakat

The property stated in the above question is under the category of zakat on gold and savings. Therefore, if both categories of property fit the stated conditions, then zakat should be paid.

Generally, when a property fulfils two things which are the hawl and nisab, then one is obligated to pay for zakat.

We cite here the conditions that obligate one to pay zakat, which is:

Therefore, one who fulfils the above three conditions which are Islam, nisab and hawl, is obligated to pay for zakat.

Next, pertaining to the nisab for gold, its amount equals to 85 grams. Zakat is imposed for 2.5% upon the final amount in the period of one year in the saving when it reaches the nisab and hawl whether reaching the exact amount or exceeds the nisab.

This is in accordance with a hadith narrated from Ali bin Abi Talib RA where the Prophet PBUH said:

While pertaining to the nisab for savings, we are of the opinion that it is the same as nisab for gold in terms of function and position as the medium of exchanging things with the power to buy something. Hence, whatever item or thing used and accepted as cash money and price, all fall under the same category. Refer our article, https://muftiwp.gov.my/en/artikel/al-kafi-li-al-fatawi/2669-al-kafi-846-zakat-wang-simpanan-kwsp

Therefore, the position of cash money including cash savings in the bank is the same as the position of gold and silver. So, both forms of property should be combined into one. If both amounts added altogether makes it reaches the nisab of 85 grams (for example equals to RM15,762) and above, then it is wajib to take out 2.5% of it for zakat after one hawl has passed.

Situational example, Ali’s method of keeping his property is by two methods:

Based on Ali’s situation as stated above, if we look only into the gold he owns, it is not wajib for him to pay for zakat because it does not reach the nisab. In fact, he should add the amount of his gold with his savings in the bank. If the total amount exceeds the nisab, then, it is wajib for him to pay zakat. This is the most accurate practice in this matter.

This opinion is also decided by the International Islamic Fiqh Academy in its resolution from a convention held in Jeddah pertaining to the issue of zakat of combined property between cash money and gold or silver.

However, if the gold owned is from among adornments and not only as savings, then its ruling needs to be seen according to the local uruf. If it exceeds the local uruf, then zakat is imposed. While if it is less, there is no need to combine it with cash money and zakat is not imposed.

(1) The Ruling of Zakat for Women’s Adornments:

(2) History and Position of Cash Money: