AL-KAFI #1755: IS THERE A SPECIFIC PERIOD OF TIME BETWEEN ADHAN AND IQAMAH? 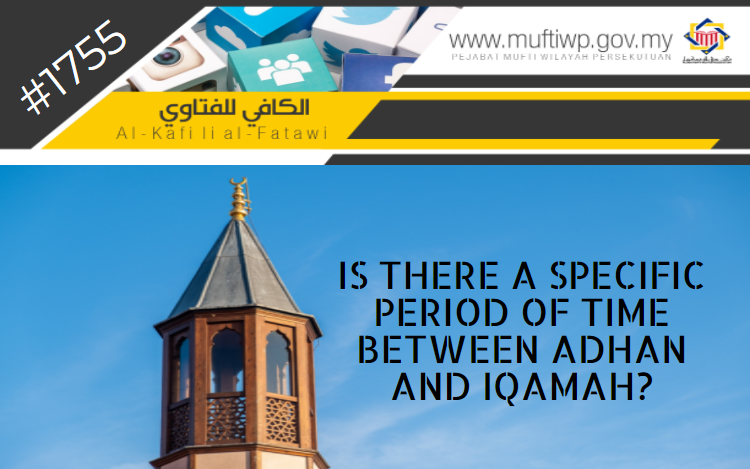 Assalamualaikum. I am sorry for asking. When I prayed with my family, I asked my son to call for adhan and iqamah. My question is, is there a specific period of time between adhan and iqamah or do I stand up right away to perform the prayer? Thank you.

It is Sunnah to put a gap between adhan and iqamah with a specific period of time according to necessities even with a period of performing qabliyyah Sunnah prayer before obligatory prayer. Besides, it is makruh to right away call for iqamah after adhan without taking some time after the adhan. This is to cherish Sunnah time as proposed by the Prophet PBUH. And it will give some time for the congregation to get ready to pray like taking ablution and the like.

Adhan and iqamah are among the eminences of Islam. It is for the purpose of calling and informing all Muslims that the time of prayer has begun as well as preparing to perform the prayer. This is as narrated by Malik bin al-Huwairith RA that the Prophet PBUH said:

Coming back to the presented question, the jurists are of the opinion that it is sunnah to put a gap between adhan and iqamah with a specific period of time so that people are ready to prepare themselves for prayer. This is based on a hadith narrated by Jabir bin Abdullah that the Prophet PBUH said to Bilal:

And it is sunnah for the muadhhin and imam to separate between adhan and iqamah with enough time for people to gather in the praying area and in the period of people able to perform Sunnah prayer which is performed before obligatory prayer. And to separate between them both (adhan and iqamah) during Maghrib prayer by pausing a bit, and with the purpose of gathering more people before Maghrib prayer following a logical period of time, and according to the accurate opinion to the author, indeed, there is a sunnah prayer before Maghrib, so the period to separate the adhan and iqamah is for the people to be able to perform the Sunnah prayer.

Hence, to answer the above question and based on the evidences presented, we can conclude that it is Sunnah to separate between adhan and iqamah with a specific period of time according to the need even with the period of performing Sunnah Qabliyyah prayer before the obligatory prayer. Besides, it is makruh to call for iqamah straight away after calling the adhan without giving some time after adhan. This is to cherish Sunnah time as mentioned in the above hadith. And this also gives time for the people to get ready to perform prayer like taking ablution and the like.

Besides, kindly refer the articles in the website of Mufti’s Office of Federal Territories entitled: