BAYAN LI AL-HAJ SERIES 37: WHAT IS PERMISSIBLE AFTER TAWAF WADA’? 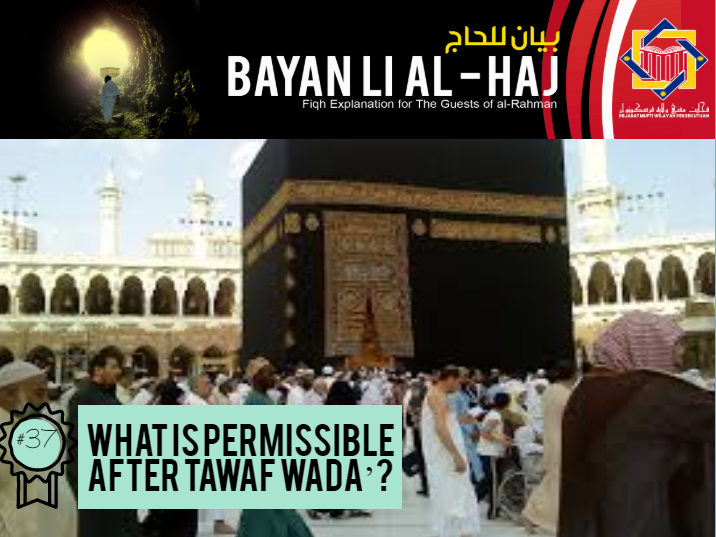 Is it obligatory to perform tawaf wada’ and what is permissible to do after performing tawaf wada’?

We will start with a hadith from Ibn ‘Abbas R.Anhuma, where he said:

“The people were commanded (by the Holy Prophet) to perform the last circumambulation around the House, but menstruating women were exempted.”

Al-Hafiz Ibnu Hajar al-Asqalani said: this hadith is evidence regarding the obligation of tawaf wada’ where the phrase of commandment strengthens the obligation and a specific exemption for menstruating women. (See Fath al-Bari, 3/747)

The above hadith is clear in stating that tawaf wada’ is an obligation for everyone where only menstruating women are exempted. The obligation is due to the imperative verb (فعل الأمر) used here is ‘absolute’ and there is no qareenah (connotation) which indicates it as sunnah or permissible. “الأمر المطلق” in the hadith indicates that it is wajib (الأمر المطلق يفيد الوجوب). (See Syarh al-Kaukab al-Munir, 3/3 and Syarh Zad al-Mustaqni’ by Muhammad al-Mukhtar al-Syanqithi, 13/127)

In another hadith by Ibn Abbas R.Anhuma, he said:

“The people used to go out (from Mecca after Hajj) by all sides. The Prophet (ﷺ) said: No one should leave (Mecca) until he performs the last circumambulation of the House (the Ka'bah).”

Imam al-Nawawi said: “the above hadith is the evidence for the opinion that obligates tawaf wada’ and if it is left, then one will have to pay dam (fine). This is the authentic opinion according to our madhab and the majority of scholars.” (See Syarh Sahih Muslim, 9/79)

Imam al-Nawawi also said: “Our colleagues said, “Whoever has completed his manasik and decided to stay in Mecca, then there is to tawaf wada’ for him, this is agreed by scholars. It does not matter whether he is a Mecca resident or not. If he then decides to leave Mecca to go back to his own country or other countries, then it is obligated for him to perform tawaf wada’.” (See al-Majmu’, 8/254)

Imam al-Syaukani explains the meaning of the hadith: “The Prophet PBUH’s words: “It is prohibited for someone from going back home…” (to the end of hadith), is the evidence for the obligation of tawaf wada’. (See Nail al-Autar, 5/106)

Regarding what is permissible after tawaf wada’, The 35th National Hajj Muzakarah of the Hajj Season 1440H which met on November 9th-11th, 2018, 1st- 3rd Rabi'ul Awwal of 1440 Hijri has decided on the Things that are Permissible After Tawaf Wada ', as the following:

Second: After Tawaf (in hotel or accommodation)

Hopefully, this explanation will answer the issues regarding tawaf wada’ and what is permissible and not.