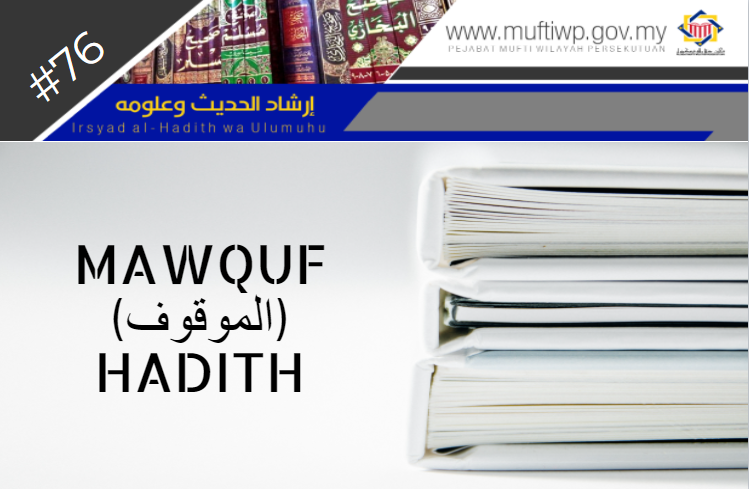 What is meant by Mawquf Hadith?

Based on the presented question, the question is on mustholah hadith or named as ulum al-hadith. Mawquf hadith is one of the types of hadith related to the sanad.

The Definition of Mawquf Hadith

Imam al-Baiquniy in his manzhumah has given the definition of Mawquf Hadith as the following:

“What is related to the ashab (the companions of the Prophet PBUH) from among the words or actions are named [Mawquf Hadith]”.

According to the definition given by Imam al-Baiquniy, mawquf hadith is a hadith which is related to the companions of the Prophet PBUH in terms of words, actions and its sanad is not related or connected to the Prophet PBUH.

Before this, we already explained on Munqathi’ Hadith in which its sanad stops at the Tabi’in or after them. However, Mawquf Hadith is a hadith which sanad stops at the Companions RA only and it does not reach to the Prophet PBUH. For that, this is the difference between these two terminologies.

The Definition of Sahabah

Sahabah (Companions) are each people who met the Prophet PBUH, believed in him and passed away while believing in Allah SWT. According to Imam Ibn Salah, what is famous among ahl al-hadith is that each Muslim who witnessed the Prophet PBUH is called as sahabah. While Imam al-Bukhari said that whoever befriended the Prophet PBUH or witnessed him among the Muslims are said as the sahabah.

The Example of Mawquf Hadith

Among the example of mawquf hadith is as the saying of Sayyidina Umar RA:

The Ruling of Mawquf Hadith

Pertaining to mawquf hadith, the scholars divide it into two types:

We already know that mawquf hadith is a hadith related to the Companions whether by words, actions or taqrir. Therefore, some jurists (fuqaha’) named mawquf as athar and marfu’ as khabar (خبر).

May this brief explanation give some benefit and understanding for us in science of hadith. Lastly, may Allah SWT give us understanding in religion as well as practicing it. Ameen.