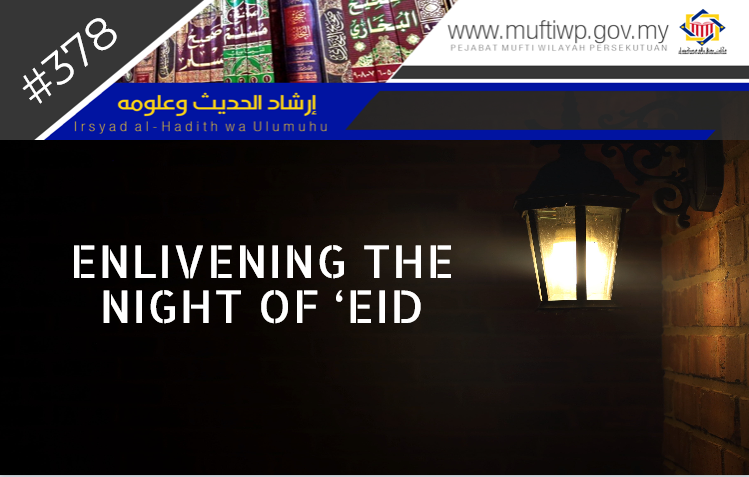 Assalamualaikum ustaz. I want to ask, is it true that there is a hadith which mentions the advantages of the night of ‘Eid? The reason is I see most people are distracted on the night of ‘Eid with unbeneficial matters, different from how they are during the nights of Ramadhan. Hope for an explanation from ustaz.

The hadith meant in the question can be found in many hadith books. Among them is narrated by Abu Umamah al-Bahili:

“Whoever spends the nights of the two ‘Eid in praying voluntary prayers, seeking reward from Allah, his heart will not die on the Day when hearts will die.”

The day where hearts die meant in the hadith is the day when people would love worldly matters and forget his true role as the slave of Allah SWT.

The sanad of the hadith is dhaif (weak). The reason is there is a weak narrator named Baqiah bin Walid in the sanad of this hadith.

This hadith is also narrated by Imam al-Baihaqi in three of his books Al-Sunan Al-Kubra (3/319), Syu’ab Al-Imam (3711) and Fadhail Al-Awqat (150). He cited the sanad and narrated the hadith trough mauquf [1] from the narration path of Ibrahim bin Muhammad al-Aslami from Thaur bin Yazid from Khalid bin Ma’dan from Abu Umamah.

There is another hadith which has a similar meaning to the above stated hadith. The hadith is narrated by Imam al-Tabarani from Ubadah bin Somit, the Prophet PBUH said:

“Whoever performs prayer (whether it is obligatory or sunnah prayers) on the night of Eidulfitri and Eiduladha, then his heart will not die on the day when hearts die (people).”

Narrated by al-Tabarani (159) in Al-Mu’jam Al-Awsat

Al-Haithami said the hadith is a weak hadith. The reason is there is a narrator named Umar bin Harun al-Balkhi. He is a person whose memorization is weak. However, he is praised by Abdurrahman bin Mahdi, but is greatly criticized by most hadith scholars of his time. (Refer Majma’ Al-Zawaid Wa Manba’ Al-Fawaid, 2/233)

Thus, most hadiths regarding enlivening the night of ‘Eid are weak. However, we consider these hadiths are included in fadhail ‘amal which means hadiths regarding the advantages of worship. It is not related to rulings of whether a matter is halal or haram. The majority of scholars ruled it permissible to practise a dhaif hadith as long as it is only regarding the matters of fadhail ‘amal. This is the opinion presented by Imam al-Nawawi [2].

Hence, we say that it is permissible to enliven the nights of ‘Eid with acts of worship such as congregational prayer, sunnah prayer, reciting the Quran, tasbih, istighfar, takbir and others. This is the best way to close our Ramadhan.

Furthermore, Imam al-Nawawi said it is permissible to enliven the nights of ‘Eid with obedience and worship. This is also the advice given by Imam al-Syafie in his book al-Umm. However, the hadiths regarding enlivening the nights of ‘Eid are dhaif and it is only permissible because it involves fadhail ‘amal. The nights of ‘Eid are also among the nights when supplications are granted. It is stated in a hadith that there are five nights when supplications are granted and those nights are, Friday night, the night of Eidulfitri, Eiduladha, the beginning of Rejab and nisfu Sya’ban.

He said that the masyaikh of Medina would go to the mosque. They would supplicate, recite tasbih, takbir, dhikr and perform worship on the nights of ‘Eid. (Refer Al-Majmu’ Syarh Al-Muhazzab, 5/42)

Considering what have been stated, let us all enliven the night of ‘Eid with matters that will lead us to the remembrance of Allah SWT. All the while we are preparing to celebrate Syawal we should not forget that we are the slaves of Allah SWT. Don’t end or close our Ramadhan with sins towards Allah SWT.

Here, we include several advices as a guide on the night of ‘Eid:

Hopefully, we will be among the people who are always committed in our preparation for the hereafter.

1] Refer the link http://muftiwp.gov.my/ms/artikel/irsyad-al-hadith/1114-irsyad-al-hadith-siri-ke-76-hadith-mawquf. In short, hadith mauquf are any words or actions of any companions of the Prophet PBUH.

[2] We have previously discussed on the ruling of practising with hadith dhaif in Irsyad al-Hadith Series 6 and 68. Please refer to the following links: