IRSYAD AL-HADITH SERIES 478: THE MEANING OF THE SUPPLICATION ASKING FOR PROTECTION AGAINST CONTAGIOUS DISEASES (FINAL SERIES) 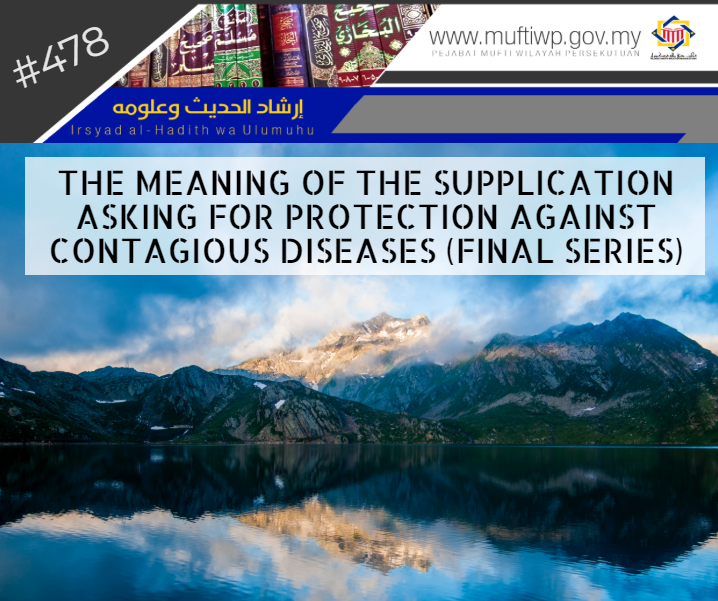 Assalamualaikum SS Datuk Mufti, what is the source and meaning of the following supplication?

It is an obligation for every individual to always supplicate to Allah SWT to be saved and blessed in life as well as protected from any harm. The reason is there are countless evidences from the Quran and hadith of the Prophet PBUH that commanded every person to supplicate to Allah SWT. Among them is a statement of Allah SWT:

“Call upon your Lord in humility and privately; indeed, He does not like transgressors.”

Source and Status of Hadith

According to the above question, we would like to cite the full supplication narrated by Imam Ahmad in his Musnad, Imam Abu Daud and Imam Ibnu Majah in their Sunan:

“O Allah! I ask you for pardon and well-being in my religious and worldly affairs, and my family and my wealth. O Allah! Cover my weaknesses and set at ease my dismay. O Allah! Preserve me from the front and from behind and on my right and on my left and from above, and I seek refuge with you lest I be swallowed up by the earth.”

The Meaning of the Du’a

Pardon (forgiveness) in this supplication means being free from the sins committed. As for ‘afiyah, it is security from harm and hardship. Covering one’s weaknesses is coverage from anything that is shameful or disgraceful if others learn about it. As for ease from dismay means contentment in one’s heart and he is free from fear, arrogance and others. (See: Syarah Sunan Ibn Majah, 1/276)

According to Imam al-Naawi regarding the meaning of ‘afiyah as stated in the above supplication, there are already numerous supplications that encourage us to always ask for ‘afiyah (to Allah SWT) and it (the word ‘afiyah) is a general utterance which is included in it is a rejection of anything that is harmful physically, mentally or spiritually whether it is in this world or the hereafter. (See: al-Minhaj Syarah Sahih Muslim, 46/12)

While, according to the opinion of Syeikh al-Munawi, ‘afiyah means security (safety) from illness and catastrophe. It also includes prosperity in this world and religion. Furthermore, ‘afiyah is also a protection against worldly illnesses and the illness of the heart in a human. (See: Faidh al-Qadir, 107/4)

Considering several of the above definitions, we will conclude that al-‘Afiyah is safety or security in religion from fitnah, on a person’s body from any illnesses, regardless whether they are physical illnesses or the illness of the heart or others and for a person’s family and property from harm and catastrophe.

To conclude, supplication is one of the special worships for it connects a slave to Allah SWT. Moreover, in the chapter of du’a, it is a wide field where it is not obligatory for us to only supplicate from du’a taught by Allah SWT in the Quran and taught by the Prophet PBUH in the hadiths. Furthermore, it is permissible for us to supplicate with any type of supplication if it is good and does not contradict the religion. Lastly, may Allah SWT bless us continuous safety and protect us from anything that is harmful in this world or the hereafter. Amin.