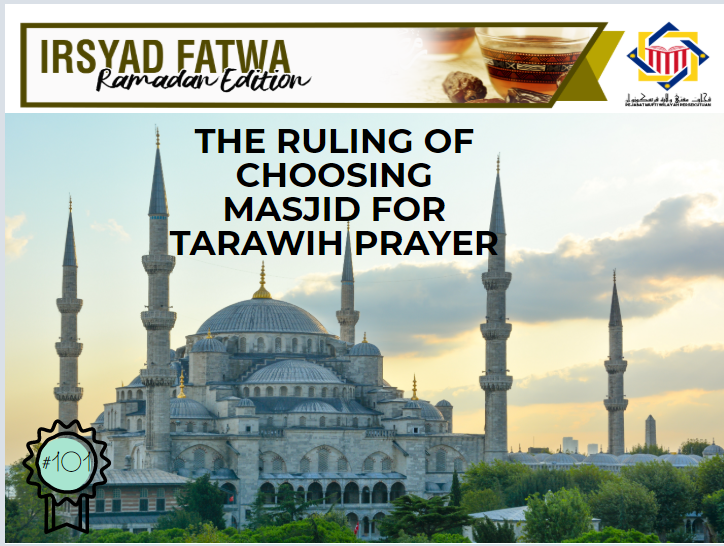 Assalamualaikum His Eminence Mufti. What is the ruling for me choosing masjid for tarawih prayer in terms of the beautiful recitation by the imam and masjid’s environment which is calm and peaceful to help me focus in performing worship during Ramadhan?

Tarawih prayer is one of the highly encouraged Sunnah prayers in Islam. The rewards of performing tarawih is so huge, as narrated by Abu Hurairah RA where the Prophet PBUH said:

"Whoever establishes prayers during the nights of Ramadan faithfully out of sincere faith and hoping to attain Allah's rewards (not for showing off), all his past sins will be forgiven."

The hadeeth clearly stated that the action of qiyam in Ramadhan includes tarawih prayer, recitation of the Quran, dhikr, du’a and other worships performed during the nights of Ramadhan. Performing this with a firm faith in Allah and hoping for the rewards from Him, then the doer’s previous sins will be forgiven.

Imam al-Nawawi rahimahullah upon commenting on the above hadeeth in his book, Syarah al-Nawawi ‘Ala Muslim (6/377) said: Qiyam in Ramadhan means tarawih prayer.

Basically, all masjid is the house of Allah. Hence, it is permissible to perform prayers at any masjid whether it is far away or close to one’s home.

In a hadeeth narrated by Abu Musa al-Asy’ari RA, it is recorded that the Prophet PBUH said:

Imam Ibn ‘Allan al-Bakri al-Syafi’e rahimahullah upon commenting on the above hadeeth said: The farther it is the place of one’s prayer, the bigger the reward. Refer Dalil al-Falihin Li Thuruq Riyadh al-Salihin, Ibn ‘Allan (6/543)

Then, it is clear that whenever a person goes to other masjid farther from his place of residence with the intention of getting more reward, then it is permissible.

It is the same for those who go to other masjid due to beautiful recitation of the imam as well as the masjid’s environment which is conducive and comfortable, it is also permissible to do so.

It is because, a person is highly encouraged to recite the Quran with the most beautiful and good recitation. This is in accordance to what is said by the Prophet PBUH:

“Recite the Qur'an to me”

In our opinion, the action of choosing any particular masjid to perform tarawih prayer to increase the focus in prayer through beautiful recitation of the imam as well as the masjid’s environment which is comfortable is permissible.

For those intending to do this, they should go earlier (as the masjid is far away from their home) to gain more rewards like performing prayer on time as well as getting the rewards of sitting in the first saf.

It is important for us to state here that it is always prioritized to perform prayers at masjids which are in our own residence, except when there are other factors to be considered. This is in accordance with the Islamic legal maxim:

We hope that Allah SWT always give us the true understanding in practicing the religion. Ameen.