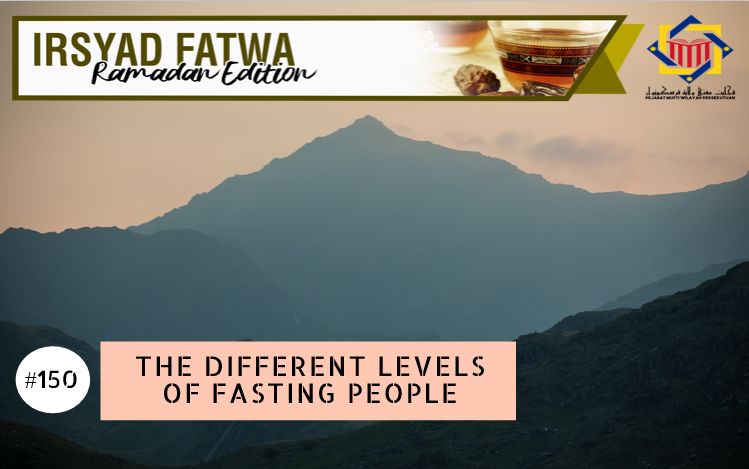 Are there different levels for people who fast in Ramadhan?

The Advantages of the Month of Ramadhan

The month of Ramadhan is a month filled with blessings. It is the month where the holy book of the Quran is revealed. Allah SWT states:

“The month of Ramadhan [is that] in which was revealed the Qur'an, a guidance for the people and clear proofs of guidance and criterion.”

Syeikh al-Tantawi when commenting on this verse said: “Allah SWT praises the month of Ramadhaan compared to any other months because Allah SWT’s book (the Quran) is revealed in it.” (See al-Tafsir al-Wasit li Tantawi, 1/386)

The month of Ramadhan is the month where we can increase our faith and the month of forgiveness from Allah SWT. This is stated in a hadith narrated by Abu Hurairah RA, where the Prophet PBUH said:

“He who observed the fasts of Ramadan with faith and seeking reward (from Allah), all his previous sins would be forgiven,”

When Imam al-Nawawi commented on this hadith, he said the meaning of having faith is acknowledging its benefits and the meaning of hoping or seeking rewards is a person who fast only with hopes to be rewarded by Allah SWT and not to show off to others or anything that contradicts with the meaning of sincerity. (See al-Minhaj Syarh Sahih Muslim, 6/39)

In the month of Ramadhan, the doors of paradise are opened and the doors of hell are closed and this is explained in a hadith narrated by Abu Hurairah RA, where the Prophet PBUH said:

“When there comes the month of Ramadan, the gates of mercy are opened, and the gates of Hell are locked and the devils are chained,”

In commenting the above hadith, Imam Badr al-Din al-Aini stated in his book: “What is meant by the opening of the gates of mercy (paradise), for there are increase in obedience in the month of Ramadhan. The same is like when Allah SWT opens the gates of worship, thus the path towards paradise is made easy in the month of Ramadhan because our worships and good deeds are easily accepted.” (See Umdatul al-Qari Syarah Sahih al-Bukhari, 10/266)

The Levels of Those Who Fast

Imam al-Ghazali classifies the level or status of those who fast are divided into three parts:

Furthermore, Imam al-Ghazali also states the encouraged actions to be done while fasting in order to protect and increase our deeds, which are:

According to the above question asked, there are different levels of people who fast and protecting his deeds and actions. This is as stated in the divisions presented by Imam Ghazali in his book which are umum, al-khusus and khusus al-khusus.

Imam al-Maraghi when commenting on the above verse said it is an obligation to fast and to increase one’s deeds in the month of Ramadhan as well as abstaining one’s desires to increase his piety and faith in Allah SWT. (See Tafsir al-Maraghi, 2/68)

Allah SWT raises the levels and status of His slaves who are able to protect and increase their worships in the month of Ramadhan with sincerity. The reason is every good deed in Ramadhan will be rewarded by Allah SWT Himself. This is narrated in a hadith from Abu Hurairah RA, the Prophet PBUH said:

"Allah said: The Fast is for Me and I will give the reward for it, as he (the one who observes the fast) leaves his sexual desire, food and drink for My Sake.”