IRSYAD AL-FATWA RAMADHAN EDITION SERIES 164: THE RULING OF EATING IN LARGE QUANTITY WHILST FASTING BECAUSE HE FORGETS THAT HE IS FASTING 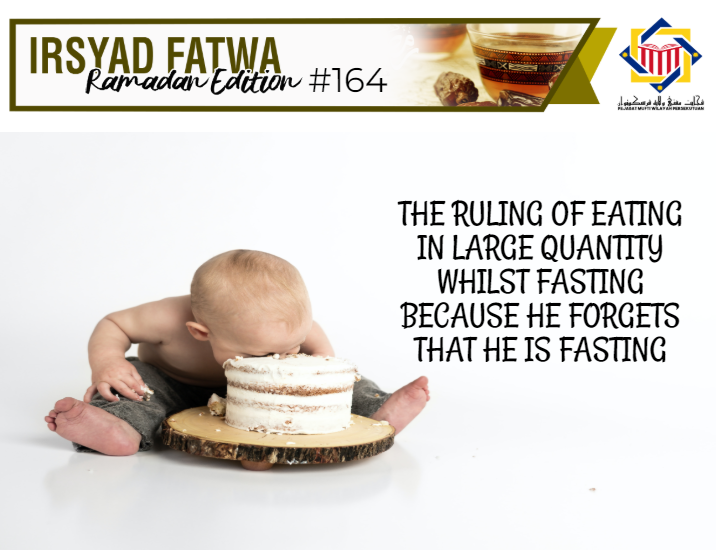 Assalamualaikum ustaz. If we accidentally eat and drink while fasting, it is forgiven. My question is, what if when he almost finishes his food, only then he remembers that he is fasting. Is it permissible for him to drink in order to avoid choking?

Eating and drinking are categorised under actions which invalidate fasting. There are many evidences and narrations which state this, among them, is narrated by Abu Hurairah RA, he said that the Prophet PBUH narrated from Allah:

“He has left his food, drink and desires for My sake”

Still, humans are not named insan (إنسان) without the attribute of being forgetful as mentioned by scholars. Therefore, generally, Allah SWT will lift sins from the actions done when a person forgets.

This is as mentioned in a hadith narrated by Abu Dzar al-Ghifari RA where he said that the Prophet PBUH said:

Allah has forgiven for me my nation their mistakes and forgetfulness, and what they are forced to do.

The same goes to those who fast where they are also not free from being forgetful like eating and drinking while forgetting. In this case, even if the fasting person does something which invalidates his fast, however, as long as he did that while being forgetful, it is not considered as invalidators of fasting according to syara’. This is what is mentioned in a hadith narrated by Abu Hurairah RA where he said that the Prophet PBUH said:

"If somebody eats or drinks forgetfully then he should complete his fast, for what he has eaten or drunk, has been given to him by Allah."

A question arises, what is the limit for these actions? Is it forgiven while being forgetful includes eating and drinking in small and large quantity? So, the Shafi’i scholars have differing opinions on this issue and they are divided into two main opinions. We share some of the opinions as the following:

First: Imam al-Nawawi used the general meaning of hadith narrated by Abu Hurairah RA above as evidence, then he states his own opinion stating:

“When someone eats or drinks while being forgetful, it does not invalidate his fast according to us (al-Shafi’ie scholars) whether it is (the quantity of eating and drinking) a little or a lot. This is the opinion of the madhhab.”

Second: However, it is undeniable that some scholars among the Shafi’e scholars themselves state a different opinion on this issue. This is as what is mentioned by Sheikh Taqiyuddin al-Hisni:

“If it (the act of drinking and eating) is in large quantity, then there are two opinions (on this issue). The most sahih opinion according to Imam al-Rafi’e is it invalidates fasting. This is because being forgetful with large quantity is something uncommon (not normally happens).”

As a conclusion, after we analyse some of the above evidences and arguments, we are inclined towards the final opinion in madhhab al-Shafi’e that eating in large quantity while being forgetful will not invalidate fasting according to the general meaning of hadith in this issue. However, once he realizes that he is fasting, he should stop right away. If after that, he drinks knowing that he is fasting at the time, then we state that his fasting is invalidated. Wallahu a’lam.

Lastly, we pray to Allah SWT to give us all correct understanding in religion. Ameen.