IRSYAD FATWA RAMADAN EDITION SERIES 175: IS IT WAJIB TO IMSAK FOR WOMEN WHO ARE PURE FROM HAID ON THE DAYTIME OF RAMADAN? 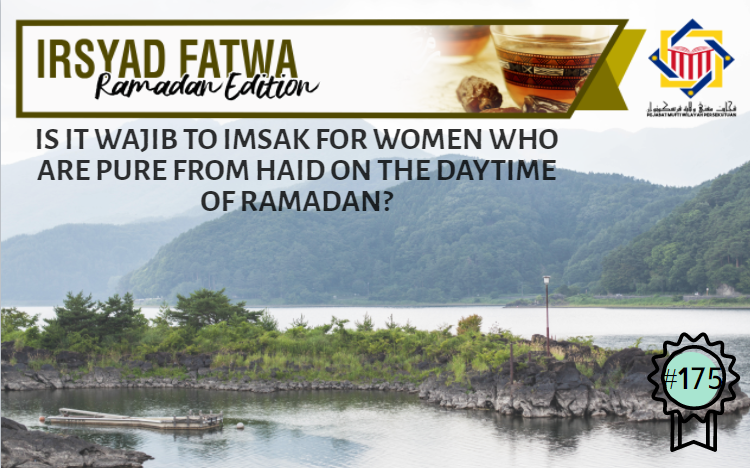 Assalamualaikum wbt. I am already pure from haid after Zuhr prayer in the month of Ramadhan. I ate and drank before that. After I am pure from the haid, is it wajib for me to fast and am I prohibited from eating and drinking after that?

In madhhab al-Shafi’e, the scholars discuss the ruling of women who are pure from haid or nifas on the daytime of Ramadan, whether it is wajib for her to imsak (abstaining herself from eating and drinking) or not. It is as followed:

Imam al-Nawawi said: “While women who are menstruating or postnatal bleeding are not wajib to fast as it is invalid (the fast) for them and if they are pure (from haid or nifas), it is wajib for them to replace their fasting as mentioned in a hadith narrated by Aisha, “We were told to replace the fast, but were not told to replace the prayer.” So, it is wajib to replace (the fast) for menstruating women based on the hadith, and it is analogically deduced for postnatal bleeding… and if they are pure in the daytime (of Ramadan), then it is sunnah for them to imsak (abstaining themselves from eating and drinking) on the remaining period and it is not wajib (the imsak) upon them based on what is mentioned by the author and this is the opinion of madhhab al-Shafi’e”. (Refer: Al-Majmu’ Syarh al-Muhadzzab, 6/256).

Imam al-Nawawi said: “If the excuse fades before he breaks his fast (eg: in the case of musafir), then it is not wajib for him to imsak during the time (daytime) for the remaining time, but is sunnah to do so. If he wants to eat, he should do so in secret to avoid fitnah and punishment from the governor, and it is permissible to have sexual intercourse after the excuse fades for the case of women who did not fast due to being young or (the case of) women who have become pure from haid on the day”. (Refer: Raudhah al-Tolibin, 2/372).

Syeikh Uthman Syato al-Bakri said: “And it is sunnah to imsak for a recovering patient, and musafir who reaches home (reaches his muqim) on the daytime of Ramadhan while already broke their fast, and a woman who is pure from haid during the midst of it (daytime of Ramadhan). “While it is sunnah for them to imsak due to preserving the honour of the time (Ramadhan), and it is not wajib (to imsak) because there is no negligence on their part.” (Refer: I’anah al-Tolibin, 2/269).

After analysing the above discussion, we can conclude here that the ruling for women who are pure from haid or nifas on the daytime of Ramadhan is not wajib for them to imsak (abstaining themselves from eating and drinking as well as other actions which invalidate fasting) because there is no negligence in their part, different from other conditions which obligate imsak. However, it is sunnah for the woman to imsak to preserve the honour and grace of the month of Ramadhan itself.

May Allah give us all a true understanding in religion. Ameen.