IRSYAD AL-FATWA SERIES 145 : THE RULING OF NOT HAVING KHUSYU’ IN PRAYER 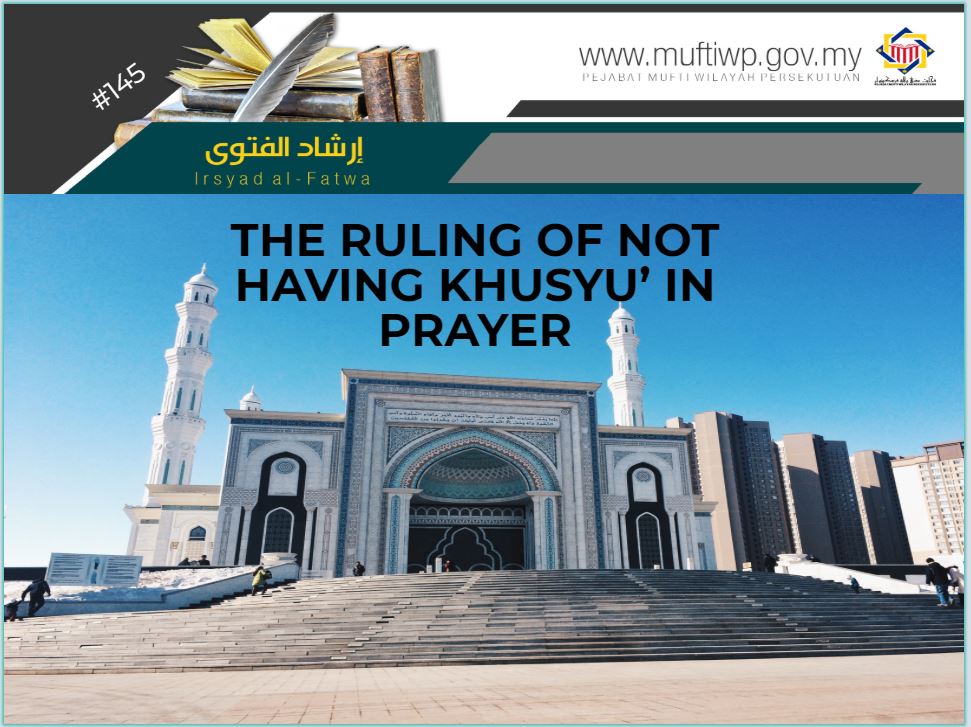 What is the ruling of not having khusyu’ (proper focus and humility) in prayer and is it considered as a sin?

Before we answer this issue, the basic thing that need to be understood is the definition of khusyu’ itself.

The following are scholars’ opinions in defining the term khusyu’. Imam Ibn Qayyim al-Jauziyyah Rahimahullah said: “Khusyu’ is the steadfast of the heart when facing Allah SWT, with humility and humbleness.” He also cited the opinion of a sufi scholar Imam Junaid al-Baghdadi Rahimahullah: “Khusyu’ is the feeling of humility in someone’s heart in front of the All-Knowing God, Allah SWT.” Refer Madarij Al-Salikin (1/521).

Regarding the rewards for those who attain khusyu’, Allah SWT mentioned their success and accomplishment in the Quran:

“Certainly, will the believers have succeeded: They who are during their prayer humbly submissive,”

The mufassirun (Quranic commentaries scholars) give several definitions of what it meant by attaining khusyu’ in prayer. Imam al-Syaukani commented: “Khusyu’ according to some scholars is the act of the heart such the feeling of afraid and fearful. While others state that it is the actions of someone, where he is calm, does not move too much during prayer, or does not do or think of anything unbeneficial in prayer.” Literally, khusyu’ is defined as calm, tawadhu’ (humility), fear and humble. See Fath al-Qadir, Al-Syaukani (1/977).

Whereas, Imam al-Tobari Rahimahullah presented the opinions of several salaf scholars regarding the meaning of the term khusyu’ as the following:

Imam Mujahid and Imam Ibnu Syihab al-Zuhri: “Khusyu’ in prayer is being calm while performing prayer.”

Amir al-Mu’minin Ali bin Abi Tolib R.A answered when asked regarding the meaning of khusyu’: “Khusyu’ in prayer means you are not moving about too much in prayer.”

Al-Hasan said: “Those who attain khusyu’, attained it in their hearts. Thus, they submit their view and themselves.” Refer Tafsir Al-Tobari, Ibn Jarir al-Tobari (19/8-9).

According to the above opinions of scholars, we can conclude that khusyu’ is defined as the act of the heart where it includes the feeling of fear and humility while facing Allah SWT and it is showed through the actions of someone who is calm, not moving too much and being submissive and humble while praying.

Steps to Attain Khusyu’ in Prayer

The following are several steps that could help someone to attain khusyu’ in prayer.

Remembering death helps someone in attaining khusyu’ in his prayer. The Prophet PBUH said:

“Remember death in prayer, for someone who remembers death in his prayer would beautify his prayer. Pray as if it is the last prayer for you. Remember, for there will be a time when you would be forced to leave it (unable to pray due to sickness or being too old).”

Narrated by al-Baihaqi in Al-Zuhd

Second: Does Not Perform the Prayer Hurriedly of Hastily

Among the ways to attain khusyu’ in prayer is to perform it calmly. The act of hurriedly or hastily performing prayer, without toma’ninah (calmness) in ruku’ and sujud is prohibited by the Prophet PBUH. In a hadith from Abu Hurairah R.A, he said:

“Allah's Messenger (ﷺ) entered the mosque and a person followed him. The man prayed and went to the Prophet and greeted him. The Prophet (ﷺ) returned the greeting and said to him, "Go back and pray, for you have not prayed."

Third: Understanding the Meaning of the Verses Recited During Prayer

Understanding the meaning of the verses recited during prayer helps someone in attaining khusyu’ in his prayer. The reason is, a prayer is an act of a servant facing his Rabb, Allah SWT. Hence, he should understand everything that he recited, for the verses of the Quran are the words of Allah (kalamullah).

The Ruling of Khusyu’ in Prayer

Scholars have differing opinions regarding the issue of khusyu’ in prayer. Is it an obligation or just a sunnah that completes the prayer? Imam al-Qurthubi Rahimahullah addresses this issue as the following:

Scholars have differing opinions regarding khusyu’ in prayer, their opinions are divided into two:

First: It is an obligation in prayer

The scholars that hold this opinion are Imam Abu Hamid al-Ghazali Rahimahullah. He supported his opinions with several evidences, one of them is the statement of Allah SWT:

“Establish prayer for My remembrance,”

Imam al-Ghazali commented on the above verse; the commandment of establishing prayer in the verse refers to its obligation. Indifference (not having khusyu’) contradicts the word zikr (remembrance). Hence, if someone performs his prayer indifferently (whether it is just for a while or for the whole duration of prayer), is it considered as remembering Allah SWT? Refer Ihya’ Ulum al-Din, Al-Ghazali (1/159).

This is a sound opinion of Imam al-Qurtubi, where he said, “The sound opinion is the first opinion (that state the obligation of khusyu’ in obligatory prayers). And khusyu’ is in one’s heart.”. ‘Ubadah bin al-Somit R.A said: “Khusyu’ is a knowledge that will be the first to be lifted from humans.” Refer Al-Jami’ Li Ahkam Al-Quran, Al-Qurthubi (12/97).

Second: Khusyu’ is a sunnah that completes prayer.

This is the opinion of Imam al-Nawawi Rahimahullah. He said: “It is sunnah to attain khusyu’ in prayer, being humble and submissive, reflecting on the meanings of the recitations in prayer, and does not think about anything unrelated to it. It is makruh (undesirable) if someone think about other mubah (permissible) things or prohibited things, such as drinking alcoholic beverages.”

“Allah forgives my followers those (evil deeds) their souls may whisper or suggest to them as long as they do not act (on it) or speak.”

After analysing the above opinions, we are inclined towards the opinion presented by Imam al-Nawawi and the majority of scholars stating that prayer without khusyu’ is valid. However, it is makruh if someone commits actions that could prevent him from attaining khusyu’, such as moving too much, thinking about other things and others. Furthermore, praying without khusyu’ decreases the rewards of the prayer performed.

We are not denying the opinion that obligates khusyu’ in prayer for it has a strong basis. Imam Ibn al-Qayyim said:

“The prayer of the hypocrites (munafiq) is just in their actions, not in their hearts.” See Madaarij Al-Saalikin, Ibn al-Qayyim (1/354).

Let us establish our prayer with khusyu’ and reflect on the meanings of the recitations, so that our prayer will not only be in our actions and movements but an act from the focus, humility, humbleness and submission of Allah SWT in front of Him. We pray that Allah SWT gives us all the ability to attain khusyu’ in prayer and may He accept all our worships. Ameen.