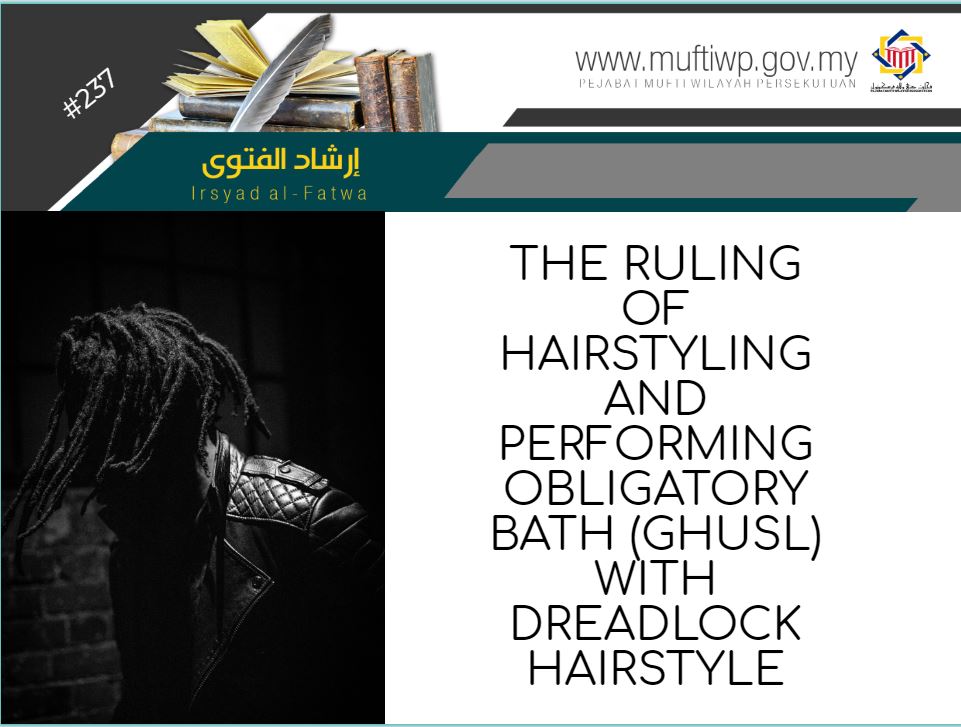 Salam. If someone has a dreadlock hairstyle like Bob Marley, is his obligatory ghusl (obligatory bath) valid?

The Background of Dreadlock Hairstyle

Dreadlock, locs or dreads according to Kamus Indonesia, is a hairstyle that was made famous by the Rastafarians from Jamaica. The structure and fashion of this hairstyle varies, but generally it can be defined as rope-like strands of hair. There are various methods to achieve this dreadlock hairstyle. There are some people that could get this hairstyle naturally while others use various techniques of hairstyling. According to our quick search, there are methods that inhibits water from washing the hair while others can be washed freely and even shampooed. [1]

Imam al-Baji al-Maliki (w.474H) Rahimahullah explains the hadith: “This shows that going out of the mosque to groom the hair is sanctioned (by Syara’). Grooming hair inside of mosque is prohibited for the mosque will be littered with anything that falls from the hair. It may disturb other people inside the mosque or causes harm to them from the lice that may be from someone who does not take care of his hair hygiene by combing or washing it. The ruling for beards is the same as hair but is more important for hair because it can be covered while beards are always visible.” Refer al-Muntaqa Syarh al-Muwatta’ (7/269)

In al-Taqrirat al-Sadidah (pg. 78), the author said that among the things considered as sunnah fitrah is: “al-iddihan (oiling) of the body, and its nature is ghibban, which means from time to time, and the sunnah is stronger when the skin is dry due to hot weather.”

This statement encourages us to keep a good and clean image. Nowadays, oils or conditioners can be used as our hair, beard and skin care routine as recommended by syarak.

Imam al-San’ani (w.1182H) Rahimahullah said, this hadith states that whoever copies the people who are fasiq, or disbelievers, specifically in their clothing, rides or actions, then he is among them. See Subul al-Salam (2/647).

It’s clear that copying or imitating the non-Muslims is restricted in Islam. However, the restriction sometimes is considered as prohibition and sometimes is undesirable (makruh). Imam Ibn Salah (w.643H) Rahimahullah said: “And whoever copies a group of people then he is among them. The copying of disbelievers sometimes is makruh, and sometimes prohibited. This depends on the copying act, whether it is copied a lot or a little. Wallahua’lam”

Examples of copying that is prohibited is copying the belief and worship of the Christians or the Jews. Allah SWT states in the Quran:

“And never will the Jews or the Christians approve of you until you follow their religion. Say, "Indeed, the guidance of Allah is the [only] guidance." If you were to follow their desires after what has come to you of knowledge, you would have against Allah no protector or helper.”

Syeikh al-Saidi said: “Allah SWT told His Messenger PBUH that the Jews and Christians will never approve of him until he follows their religion, for they invite to their religion thinking that their religion is guidance.” Refer Tafsir al-Karim (pg. 64).

The same applies to copying the actions and clothing of musicians that are synonymous with sins such as the alcoholic singers. Refer Asna’ al-Matalib (4/344) by Syeikh al-Islam Zakariyya al-Ansari (w.926H) Rahimahullah. The ruling is, it is prohibited.

However, if the copying is just a little, then it is ruled as undesirable. Some examples are:

The exception of this prohibition is when the clothing does not symbolize the people who are fasiq or disbelievers anymore. Consequently, the symbol can be permissible due to the contextual changing. Imam al-Bujairimi (w.1221H) Rahimahullah said in Tuhfah al-Habib (4/366), answering about an issue regarding the payment of kaffarah by giving tailasan / tiyalisah cloth: “Due to the fact that wearing the cloth of al-tiyalisah is no longer a symbol for them (the Jews and Christians), furthermore, in our time, it has become a general practise that is permitted. This has been said by Ibn Abd al-Salam in bid’ah-bid’ah that are permitted. Ibn Hajar said: If it has been a symbol for a group of people (which are among the obedient such as ulama), then leaving the practice may affect their stature.”

History has recorded that the wearing of tiyalisah, or cloth to cover the head is a representation for the Jews and the Christians. Hence, the original ruling is undesirable, as stated by Syeikh al-Samhudi al-Syafie. However, most of them have left the practise of wearing it as a symbol of their religion, and it has changed into a general clothing, and in turn changed into a clothing of those who can teach and issue fatwa and are not considered as a prohibition of copying other people. An example from our time would be the wearing of shirts, coats and ties, they are not considered as religious copying or a type of fasiq. The ruling for wearing them is permissible.

The Ruling of Water Permeability of Dreadlock Hairstyle

From Islamic perspective, someone who has dreadlock hairstyle is obligated to ensure that water reaches the hair and the scalp when performing obligatory bath. If he fails to do so, the obligatory bath is invalid, and so is the prayers performed after the bath, for he is still in a state of impurity (hadas).

We include a reference from al-Fiqh al-Manhaji (1/89), regarding the second prerequisite of obligatory bath, which is distributing the water on the body evenly:

“Second: Washing of all body parts, skin and hair and distributing water evenly on hair and scalp.

This is in accordance with a hadith from Jabir RA, where he said:

“When asked about the way to perform the bath, he answered, the Prophet PBUH take three handfuls of water and pour it over his head. Then, he pours water over himself.”

Another hadith from Ummu Salamah R.Anha, when she asked the Prophet PBUH on how to perform the bath. He said:

“It is enough for you to throw three handfuls of water on your head and then pour water over yourself, and you shall be purified.”

The next hadith is from Ali RA, when he heard the Prophet PBUH said:

"Whoever leaves an area the size of a hair on his body and does not cleanse it from sexual impurity, such and such will be done to him in the Fire." 'Ali said: "Because of that I am hostile towards my hair," and he used to shave his head.”

Regarding the hadith by Umm Salamah stated above, Imam al-Syirazi wrote in al-Muhazzab: “If a woman has braids in her hair and water can reach it, then it is not obligatory for her to undo it. This is according to the hadith from Ummu Salamah R.Anha when she asked the Prophet: Messenger of Allah, I am a woman who has closely plaited hair on my head; should I undo it for taking a bath, because of sexual intercourse? He (the Holy Prophet) said: No, it is enough for you to throw three handfuls of water on your head and then pour water over yourself, and you shall be purified.” If water could not reach the hair and the scalp, then the braid must be undone, for water permeability to the hair and scalp is obligatory.

Imam al-Nawawi (w.676HHHH) Rahimahullah said that this is what has been agreed by scholars from mazhab Syafie and the majority of the scholars. Refer al-Majmu` Syarh al-Muhazzab (2/186-187).

Hence, according to these statements, merely having dreadlock hairstyle is not a reason for the invalidity of the obligatory bath. Obligatory bath is only invalid when water is not distributed evenly to hair and scalp.

Based on the above statements, we conclude the following:

“The Prophet PBUH has cursed the lady who lengthens her hair artificially and the one who gets her hair lengthened,”

May this explanation give benefits to us all in performing the obligation of prayer as has been taught to us by the Prophet PBUH. Amin.