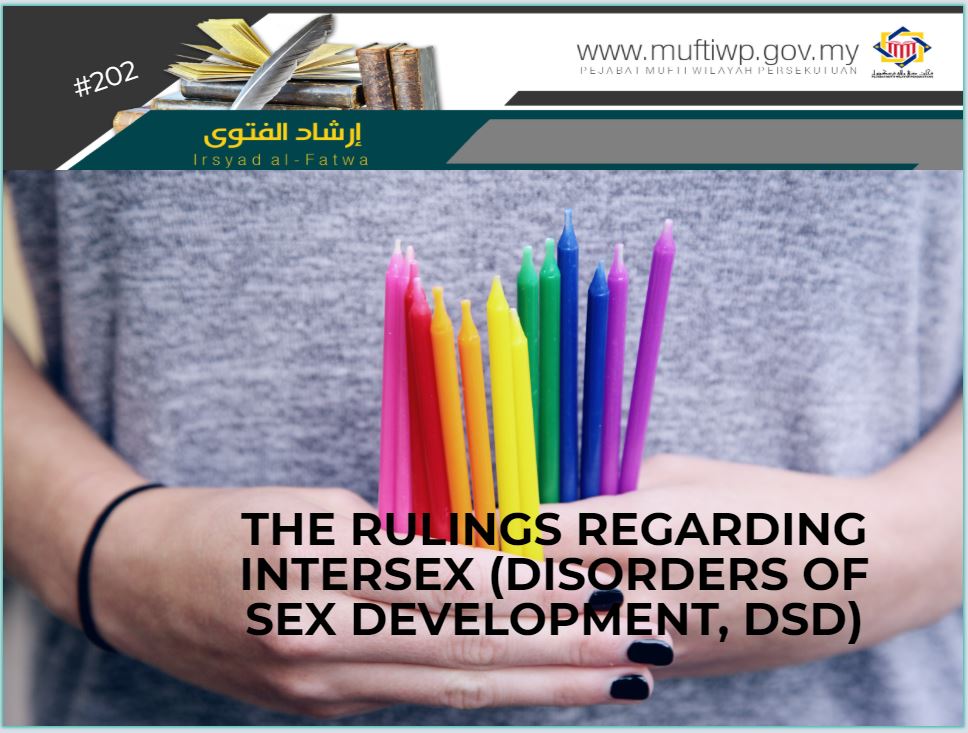 Sahibus Samahah Mufti, can you explain the definition of intersex (khunsa) and the rulings related to it, and is intersex is the same as transgender or transsexual?

The fuqaha defines intersex as: “Someone who has two genitalia, which is male genitalia and female genitalia. Or someone that does not have either genitalia but only has a hole to urinate.” Refer Hasyiah Ibn Abidin (5/464), Nihayah al-Muhtaj (6/31).

Meanwhile, according to Kamus Dewan, it is defined as: “someone who has two genitalia.” See 4th Edition Kamus Dewan.

Referring to the books written by Islamic scholars, we found that intersex is divided into two:

Medically speaking, intersex is also known as Disorder of Sex Development (DSD). Its discovery is more complex than the discussion of early scholars.

The Method to Assign Intersex Identity

There are a few other factors that are used to assign the gender of an intersex individual other than the physical appearance and genitalia, such as the chromosomes and gonads (testes and ovary).

The fuqaha states other factors for intersex classification (other than physical appearance and genitalia). Some of them are; the growth of body hairs, moustache, beards, a deep voice and the like, then the fuqaha assign them as males. If it’s the opposite, then the individual is classified as a female.

Imam al-Nawawi said: “Intersex is divided into two types: some has a male’s penis and a woman’s vagina. And another does not have either genitalia (vagina or penis). However, they have a hole to urinate. For the first type of intersex, there are a few signs to assign their identity,”

Second and Third: Ejaculation and menstruation

If the individual ejaculates at a certain time, and the semen is ejaculated through the penis, then he is a male. If the semen flows through the vagina or she experienced menstruation, then she is a female. This is however, on the condition that it happens repeatedly to support the first assumption.

Wiladah, or the process of childbirth is a concrete evidence that the individual is a female. Furthermore, it precedes other contradicting assumptions.

Fifth: The absence of menstruation when the individual has reached the age for puberty

Seventh: The emergence of certain characteristics, such as bravery and patience in fighting enemies, and strength. Thus, this shows the male characteristics of the intersex individual.

Eighth: Facial hair growth, such as moustache and beard, or the development of breasts and breast milk.

As for the second type of intersex (does not has penis or vagina), then there are no signs to determine the individual’s identity except with the feelings of attraction.

Is It Permissible for An Intersex Individual to Be an Imam?

This issue is discussed by the fuqaha when they discussed the arrangement of congregational payer. Imam al-Nawawi said: “It is invalid if a woman or an intersex to be an imam for men. It is invalid for both the obligatory and sunnah prayers. However, according to mazhab Syafie and Hanbali, if the prayer consists of only women as the makmum, then it is not a prerequisite for a man to be their (the women’s) imam. Thus, if a woman is the imam of other woman in their opinion (al-Syafi’eyyah and al-Hanabilah), the prayer is valid. This is in accordance to a narration by Sayyidah Aisyah, Ummu Salamah and Atha’ bn Abi Rabah, which states: ‘Indeed, a woman is permissible to be the imam to other women.’”. See Al-Majmu’ Syarh Al-Muhazzab, Al-Nawawi (4/96).

Thus, the conclusions for this issue are:

In another statement, Imam al-Nawawi said: “Our ashab states: The arrangement of congregational prayer is mustahab (sunnah) and not following it does not invalidate the prayer.”

Imam al-Mawardi Rahimahullah wrote in his book Al-Hawi Al-Kabir (2/340), citing the opinion of Imam al-Syafie, which states: “If a man is an imam, then his makmum (another man) stands on his right side. If the makmum is an ambiguous intersex or a woman, then they stand alone behind him (imam).”

It is makruh (undesirable) for an ambiguous intersex individual to stand beside another man in a praying line (saf), and it is also makruh for the individual to pray beside another woman. The reason is, there is a possibility that he is a man if he prays beside a woman and vice versa.

The Aurah for the Ambiguous Intersex Individual

Imam al-Buhuti Rahimahullah said: “The more ihtiyath (careful) way for an ambiguous intersex individual is to cover the aurah, the same as a woman.” Refer Syarh Muntaha Al-Iradaat, Al-Buhuti (1/150).

According to Wikipedia, transgender is defined as:

Through this definition, the act of identifying or changing someone’s original gender to the opposite gender is known as transsexual. According to Kamus Dewan, transsexual is defined as: “Someone (a man or a woman) that identifies or expresses oneself as the opposite gender, and sometimes would change their genitalia (perform sex change) through surgery.” Refer 4th Edition of Kamus Dewan.

It is clear that ambiguous intersex individual is different from transsexual people, referring back to the definition and characteristics for an ambiguous intersex individual. Intersex is asl al-khilqah (Allah SWT’s original creation, where they are born as an intersex), while transsexual is taghyir al-khilqah (changing of Allah SWT’s creation). The act of changing Allah SWT’s creation is clearly prohibited. The prohibition is stated in a few of the Quranic and prophetic evidences. Allah SWT states:

Imam al-Tobari Rahimahullah comments on this verse saying: “The scholars have differing opinion regarding the phrase ‘ فَلَيُغَيِّرُنَّ خَلْقَ اللَّهِ ’. Some of them said: ‘Surely, they would change Allah SWT’s creations of animals and castrate them.’ While others said that tattooing is the act of changing Allah SWT’s creation that is meant in the verse.” Then he included a hadith from Abdullah bin Mas’ud R.A, the Prophet PBUH said:

“Allah has cursed those women who practise tattooing or get it done for themselves, and those who remove hair from their faces, and those who create spaces between their teeth artificially to look beautiful, such ladies as change the features created by Allah.”

Al-Tobari wrote, once a question was asked to al-Hassan: “What is your opinion on a woman that carve her own face?”. Al-Hassan answered: “What is wrong with her? Allah SWT’s curse is on her, for she has changed the creation of Allah SWT.”

Lastly, it should be emphasized that the act of changing the creation of Allah SWT by changing sex is prohibited and it is a great sin. Transsexuals are completely different from ambiguous intersex individuals, because these transsexuals were originally created as a man or a woman but changed their gender to the opposite gender. While ambiguous intersex individuals are indeed created with two genitalia. Hopefully this discussion will give us a clear understanding of religion. Ameen.