IRSYAD USUL AL-FIQH SERIES 61: THE RULING OF TALFIQ TO MADHHAB MALIK ONLY IN THE CHAPTER OF NAJIS (IMPURITIES) 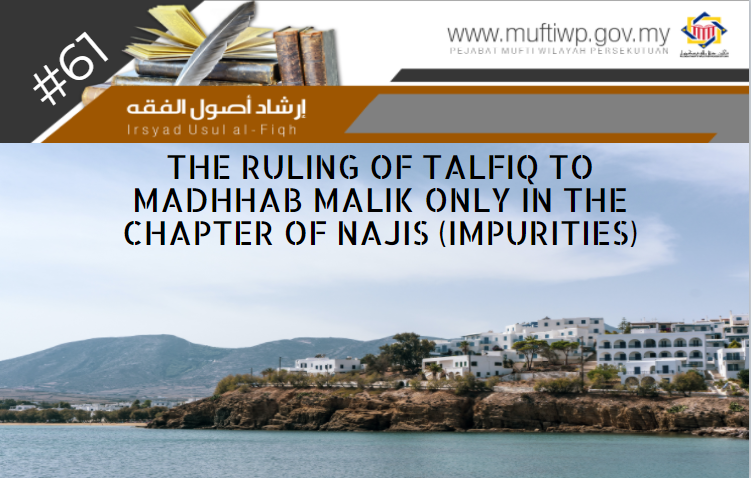 Can we talfiq to madhhab Malik on the status of impurity for dog only?

Indeed, there is khilaf (disagreement) between madhhab Shafi’e and Malik on najis (impurities). However, in the context of our country, there is no need to simply talfiq to madhhab Malik without having any need although originally, the ruling of a person believed in madhhab Shafi’e to taqlid to madhhab Malik only in the chapter of najis (impurities) is permitted with the condition of that he shall also observe all rulings related to prayer and purification in madhhab Malik. The question presented is best answered by looking at the situation, and not in general to avoid fitnah in the society.

We already explained the issue of talfiq in the following articles:

In conclusion, we are inclined to the opinion that talfiq is only permissible when there is need like hajat (need) and darurat (necessity), and done not in the purpose of being lax in the religion that one easily drops his taklif to follow his desire and lust. At the same time, it is permissible for the general public who does not reach the level of mujtahid yet to taqlid to one of the accredited madhhabs which are madhhab Hanafi, Maliki, Shafi’e and Hanbali, in consistency or in particular issues only, or change to other madhhab on other occasion. This is because there is no Shara’ evidence which obligates a person to follow only one madhhab at all times, as stated on the previous articles above. The same goes to the prohibition of talfiq that leads to confusion in implementing Islamic laws like ruling three talaq as one talaq, while the court decided for three talaq.

According to fatwa institution; Dar al-Ifta’ al-Misriyyah, the term ‘talfiq’ has three main meanings which should be mentioned here:

Based on the above category, it is clear to us that talfiq for general public in the context of practicing other madhhab based on fatwa of a mufti, faqih or mujtahid is permissible. Just it comes with the condition of that the new opinion does not contradict with the ijma’ and not driven away from the opinions of all past scholars.

The Meaning of Talfiq Only in The Chapter of Najis (Impurities)

In this issue, when a person practicing madhhab Shafi’e wants to taqlid to madhhab Maliki in the chapter of najis like swine or dog as not najis mughallazah, or purifying najis is only Sunnah, the scholars put the condition of that the person shall also observe related rulings like prayer and taharah.

“Indeed, for (Imam) Malik, the accepted opinion, that is permissible to make as fatwa and be practiced is that purifying najis is only Sunnah (in prayer) and is not wajib, so it is permissible to taqlid to this opinion with the condition that the person should also be consistent with rulings related to purification and prayers according to madhhab Malik RA. If not, it becomes talfiq in taqlid matters, while it is batil according to the decision of the scholars, some scholars even analogize it with ijma’”

The obligation of preserving rights in relation to this is vital due to the basis that purification from impurities is the requisites of validity of prayers in madhhab Shafi’e. So, prayers should be performed in tarkib (sequence/order) of the same issue.

The issue comes differently if tarkib happens on two different issues, as cited by Sheikh Zainuddin al-Malibari in Fath al-Mu`in (pg. 615) on fatwa of Sheikh Ibn Ziyad. For example, a person takes ablution with methods valid to madhhab Shafi’e like wiping part of the head, whereas this is not enough in madhhab Hanafi, then he prays facing the qibla, not to the ain of qibla due to taqlid to madhhab Hanafi. According to Ibn Ziyad, his prayer is valid although both imams decided on the invalidity of the prayer, because taqlid happens in two different issues, which are facing the qibla and wiping head during ablution.

In a slightly different case, it is permissible for a person practicing madhhab Shafi’e to taqlid to the tarjih of a mujtahid from madhhab Shafi’e who has different opinion with the final opinion of the madhhab, but has strong dalil, to that particular mujtahid, as well as ruled as fatwa by the scholars of madhhab Shafi’e in certain cases and do not contradict the ijma’. For example, a person taqlid with ikhtiyar (personal opinion which is chosen) of Imam al-Nawawi that the impurity of swine is not analogically deduced (qiyas) with dogs, hence, in purifying it, there is no need to sertu using soil and seven washing. Refer al-Minhaj Syarh Muslim (1/185-186).

The leniency is supported in the condition where taqlid to the mu’tamad (accepted) opinion will cause hardship upon one’s customary practice, for example, the situation of a preacher in the aborigine society who will always interacts with swine. This is mentioned by al-Habib Syeikh Abdurrahman bin Muhammad Ba`lawi in his book of fatwa, Bughyah al-Mustarsyidin (pg. 19) states:

“It is permissible for a person who practiced madhhab al-Shafi’e to taqlid to other madhhab, or a marjuh (antonym for rajih) opinion in madhhab al-Shafi’e due to having need, which is the persistence of hardship upon the customary practice. Whereas when there is no hardship, then it is haram to taqlid to other madhhab or marjuh opinion, unless if the person (mujtahid) which being followed is someone with expertise to do tarjih and the muqlid (person who follows the mujtahid) sees that his dalil is more rajih in compared to dalil of the imam of his madhhab”

Based on the above facts and explanations, we are inclined to state that indeed, there is khilaf between madhhab Shafi’e and madhhab Maliki in the chapter of najis (impurities). However, in the context of our country, there is no need to simply talfiq to madhhab Malik without having any need even if originally, the ruling of a person practicing madhhab Shafi’e to taqlid to madhhab Maliki in the chapter of najis is permissible with the condition that he shall also observe rulings of prayer and purification in madhhab Malik. The question presented is best answered according to the situation, and not in general to avoid fitnah in the society. This aligns with Section 39 Administration of Islamic Law (Federal Territories) Act 1993, that the Mufti ordinarily follow the accepted views (qaul muktamad) of the Mazhab Syafie, unless if the Mufti considers that following the qaul muktamad of the Mazhab Syafie will lead to a situation which is repugnant to public interest, the Mufti may follow the qaul muktamad of the Mazhab Hanafi, Maliki, or Hanbali.

May this explanation gives understanding to the questioner. Let us pray to Allah SWT to give us beneficial knowledge in dunya and akhirah. Ameen.